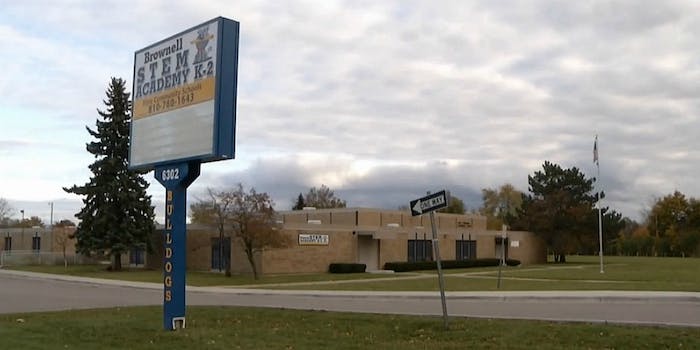 Flint Police Chief James Tolbert has apologized to the mother.

A few weeks after Ahmed Mohamed was arrested at his Irving, Texas high school, sparking a national outcry, another student was recently arrested with seemingly very little explanation.

The reason for this recent media storm about a police officer physically restraining a student? The child arrested is only seven years old.

According to the NBC affiliate in Flint, Michigan, a woman named Chrystal McCadden was called on Oct. 12 to her child’s school, Brownell STEM Academy, because her son, Cameron, was being disruptive. When she arrived, she apparently found him in the hallway by himself—with his hands cuffed behind his back.

7-year-old black child with ADHD handcuffed for acting out in class https://t.co/NxmFES4ySV via @ShaunKing pic.twitter.com/vrBAn0Ab5D

McCadden said her son has ADHD but that he’s not violent. When she requested his handcuffs be removed, the police officer didn’t have the key to free the boy. Understandably, McCadden wasn’t pleased about that.

Said the Flint police department in a statement to the TV station: “An officer was dispatched to Brownell STEM Academy in response to an urgent call for immediate assistance with a child who appeared intent on injuring himself, as well as repeatedly assaulting others.”

“I have apologized to the mother for this situation and assured her that we will protect the integrity of this investigation and will be transparent in our findings. It is our model to engage children in a positive light that will foster trust and respect, this incident does not reflect positively on that model,” Tolbert said.

McCadden was told that the police officer threatened her boy with the handcuffs if he didn’t obey the officer and sit down. When McCadden got to Cameron, he told her that he hadn’t kicked anybody or anything but a cart.

She also said that neither the police nor the school said much about the incident until she informed media.