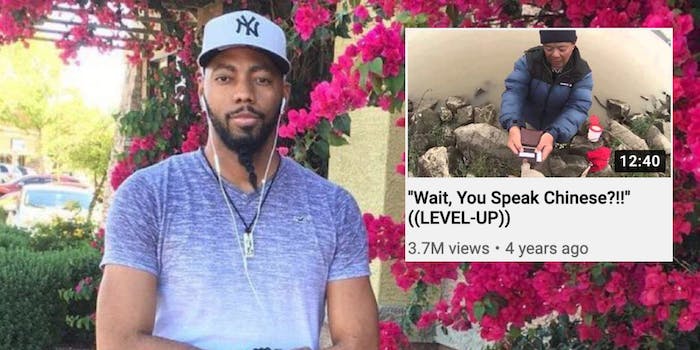 Popular YouTuber Moses “Laoshu” McCormick, who wowed millions of viewers with his ability to speak at least 20 languages, has passed away.

With more than 1 million subscribers, Laoshu, a term that translates to “mouse” in Chinese, was best known for his interactions with foreign-language speakers across the U.S.

Laoshu died Thursday evening due to heart complications, according to a GoFundMe campaign set up by his family. Donations are currently being made in order to have the YouTuber transported from Arizona back to his home state of Ohio.

“Moses Monweal McCormick was a beautiful brother, son, father and friend. He touched the lives of so many all over the world,” the fundraiser states. “His dedication and passion for not only learning but, teaching a plethora of Languages.”

Users all across social media reacted in shock to the news, sharing ways in which Laoshu personally touched their lives.

“If you are not in the language community you may not have known Laoshu but for those who knew him he was an inspiration,” @TropicalDelite said. “He spoke so many languages. This is a black American from Ohio who made videos that made Russians, Somalis, Chinese people etc. smile. R.I.P. Moses.”

Fellow popular YouTuber Xiaomanyc, who likewise garners millions of views for his ability to speak Chinese, also paid tribute to the iconic polyglot. “This guy was really the original language-learning YouTuber,” Xiaomanyc said.

Many attributed their ability to speak other languages to watching Laoshu as well, revealing the clear impact he had on countless people.

“This guy inspired me to start learning new languages in 2020. He was seriously unbelievably talented and so inspiring to me,” @im_newboy wrote. “He was kind, genuine, and made me more appreciative of the world around me. I highly suggest watching his videos on YouTube.”

Aside from his YouTube channel, Laoshu also ran an online business known as the “FLR Method,” where he helped users learn more than 60 different languages.