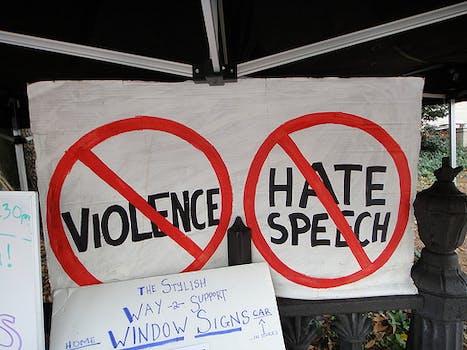 Thousands of people joined a Facebook hate group and sent death threats to a woman who allegedly posted a homophobic comment, but the comment itself may be a Photoshop hoax.

A woman who became the target of a Facebook smear campaign after being accused of making a homophobic remark may actually be the victim of an elaborate hoax.

An anti-gay comment attributed to a midwestern mother of two named Holley Biffle incited its own Facebook group with more than 1,000 followers, turning Biffle’s life upside down as she received death threats from total strangers. The only problem is, she doesn’t recall ever making that comment herself.

The remark, and the Facebook group it inspired, were first reported by April Winchell of Etsy parody site Regretsy. Ironically, Winchell’s purpose for highlighting the hate was to dissuade her readers from adding to it.

Winchell has posted an update to clarify that the homophobic comment at the center of the controversy never happened, and was likely faked by someone posing as Biffle.

“I urge anyone still targeting this woman to think about how easy it would be for someone to do this. They don’t need your password, they don’t need to set up a fake profile or hack your computer. They just need Photoshop, your picture and a message of hatred,” Winchell wrote.

Biffle originally declined to talk to the Daily Dot until she had the advice of a lawyer, and later said she was unable to comment at all due to the increasing intensity of threats.

“I just spoke to a police officer, I can no longer comment at this time,” she told us through Facebook, “I am receiving terrible death threats and I have a baby and a young son.”

Her mother-in-law, Kelly Merriman Hettig, told us that Biffle’s life is in shambles.

“We don’t know who started this or why,” she said via Facebook. “We just know that Holley is devastated, getting death threats, had her home address published and is afraid to be in her house.”

The Facebook hate group surrounding the comment has since been deleted, but Hettig said that hasn’t helped Biffle, who is staying with family for the short term.

“My son [Biffle’s husband] will be taking Holley and the children to another family member’s house to stay,” she said. “This is a hate crime that has the potential to rip this family apart in more ways than one.”

As to who is responsible, different family members have different ideas.

One family member told Regretsy that the hoaxer was a longtime nemesis of Biffle’s:

“According to the source, it was orchestrated by someone known to Holley and her friends. This person has been trying to harm her for a while now, and has finally succeeded.”

Meanwhile, Hettig told the Daily Dot that she doesn’t know who instigated the hoax:

“You have to understand that Holley is a very shy, and not very ‘worldly’ girl,” she said. “I don’t know why she was singled out. It just doesn’t make sense.”

Hettig told us that Biffle had recently made her Facebook private and shut down her Twitter account because she felt she had been spending too much time online. In response to personal attacks, Biffle has made her Facebook page public in order to raise awareness about her plight.

Both Hettig and Regretsy said the matter is in the hands of the police now.