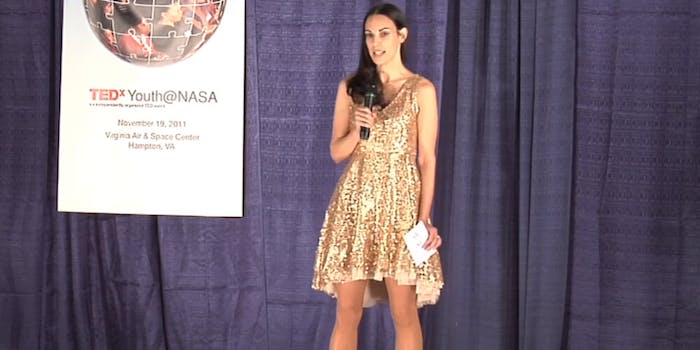 They wanted to see that they could grow up to be a sparkly scientist.

A futurist who gave a talk at NASA years ago recently shared a picture of the sparkly dress she wore that day and the story of the young girls who inspired her to do so.

“Cleaning out my closet, I came across this gown,” Rita J. King, co-director of Science House, tweeted on Friday. She told BuzzFeed News that she’d only worn it once, on Nov. 19, 2011, when she was working as a futurist for the National Institute of Aerospace and giving a talk for the TEDxYouth NASA event.

Cleaning out my closet, I came across this gown and remembered the little girls who sent me a letter and asked me to wear something sparkly for a talk I gave at NASA so they could believe that scientists could also be sparkly. pic.twitter.com/xOcZgkbiRg

King said the sparkly dress made her remember “the little girls who sent me a letter and asked me to wear something sparkly for a talk I gave at NASA so they could believe that scientists could also be sparkly.”

The day before the talk, an event coordinator contacted her with the request from the girls. While it’s not her usual NASA attire, King said she felt compelled to oblige. “I found the sparkliest dress I could,” she told BuzzFeed. “I wanted to show them I heard them.”

She ended up getting a gold sequined dress. Eight years later, she found it in great shape with the NASA pin still attached. People reacted to her story on Twitter, sharing their gratitude for King being a role model for young girls and challenging the expectations of “serious” clothing.

This is so important. The idea that masculine is serious and feminine is frivolous limits the options girls see for themselves and their future lives. This shows them that they don't have to pick between their interests and their identities. Science is for everyone. Thank you!

King told BuzzFeed she feels it was also the act of unabashedly responding to a simple request from a group of young girls that made a difference. “There’s something boldly subversive about getting up there and boldly, unapologetically wearing sequins because girls asked you to,” she said.