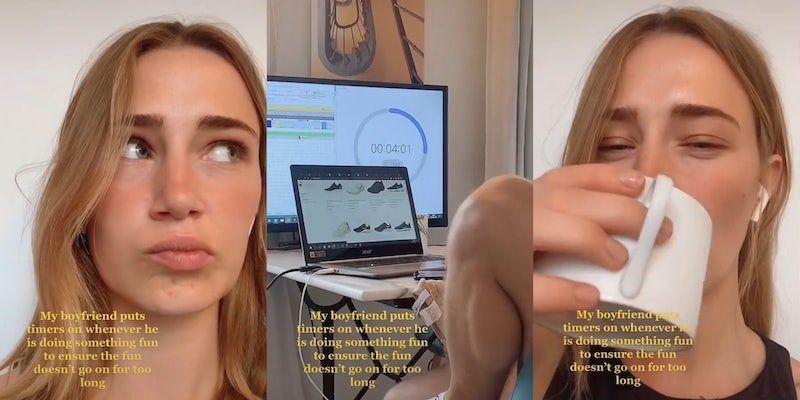 Woman’s boyfriend uses ‘fun timers’ to ensure that something fun he does doesn’t go on for too long, sparking debate

'Where do they find the self-control???'

A woman on TikTok says her boyfriend has a unique way of making sure the fun things he does don’t last too long. He uses “fun timers.”

The woman, known as Tess O’Neill (@tessoneillx), shared a video displaying her boyfriend limiting his fun time. As of Tuesday, the video garnered about 855,000 views on the social media platform.

In the video, O’Neill’s boyfriend sits at a desk with a laptop and a monitor. On the laptop, he’s online shopping for shoes. On the monitor, it appears that multiple work tabs are open alongside a timer with four minutes and two seconds left counting down.

“My boyfriend puts timers on whenever he is doing something fun to ensure the fun doesn’t go on too long,” the video’s on-screen text says.

Viewers had mixed reactions to O’Neill’s boyfriend’s hack. Apparently, he’s not the only man to set a time limit on his fun activities.

“My engineer husband does this because if he does not then he will ‘only do fun things,'” one viewer commented on the video.

“My dad does this and every time I witness I’m flabbergasted,” a second viewer commented.

A third viewer said, “I do this too or else I’ll never stop.”

“I have ADHD and if I don’t do this I’ll lose my whole day,” a fourth commented.

Other viewers said they don’t have the self control to use a “fun timer.”

“Where do they find the self control???” one TikTok user asked.

Someone else wrote, “i used to try and do this and i’d either restart my timer or just have anxiety throughout the whole ‘fun’ time lol.”

The boyfriend’s quirky habit prompted some users to speculate about his astrology placements. Multiple viewers insisted that he must be a Capricorn or Virgo, which are known as two of the most organized and hardworking zodiac signs, but O’Neill revealed that her boyfriend is a Leo.

The Daily Dot reached out to user @tessoneillx via TikTok comment.