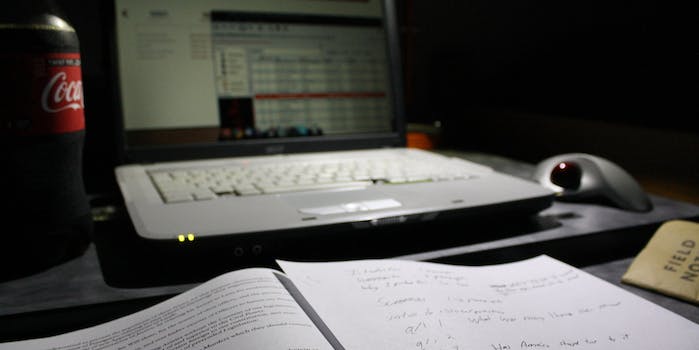 He admitted it's 'a joke,' but it's actually quite a story.

When a Craigslist ad posted by a L.A. mom looking for a “feminist tutor” to help her son pass his gender studies class went viral this week, he quickly became the punchline to the “clueless white guy” storyline.

I responded to the ad, in which the Bel Air mom claimed her son, a student at UCLA, was a “typical young man his age [who] finds the whole idea of feminism and gender studies boring and uninteresting.”

Nate’s mother, a woman named Dr. Alexandra Rose, responded, saying she was out of town testifying at a trial in Arizona but would speak to me on Friday. She included the phone number of her son, Nate Schermer.

When I reached out to Schermer, he spoke empathetically about being one of the only men in his gender studies classes, which he said he picked because he thought they would be easy. Schermer, who said he wants to go to law school, noted, “Why major in civil engineering when you can study something like gender studies or psychology that’s a lot easier?”

Schermer told me he eventually switched his major to business economics with a minor in gender studies, but needed a good grade on his final paper to pass the class. He said he felt misunderstood by his students and teachers, who weren’t willing to always listen to, or consider, his viewpoints. He said his mother wrote the ad after trying to talk to his professor about ways he could improve his grade. “My professor didn’t think my mom should be involved,” Schermer told me. “So my mom tried another way. [The ad] wasn’t worded how I would word it, but…,” he trailed off.

Schermer’s ad was successful. He gained the attention of a well-known feminist scholar and professor, who asked to stay anonymous, but who told me that while she initially laughed at the ad itself, she reached out hoping she could help. “I’m a teacher after all,” she said. “I want to help. And I think too often on the Internet we rush to judgement instead of seeing people as humans.”

Schermer said he has received some nasty replies since the ad went live. “People just assume things about people without even checking,” he lamented. And he’s right, sometimes the Internet is bad at judging character. But sometimes, it’s exactly right. 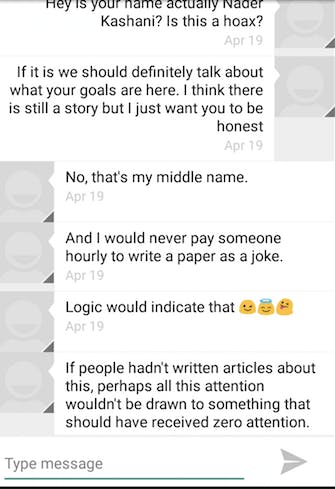 Text exchange between writer and Schermer/Kashani/Modgeddi

I discovered the hoax after routine attempts to verify his identity. When I spoke again to Schermer, although we should now call him Kashani, he admitted that he made the whole thing up so he could “attract the kind of help” he needed.

That “help” was apparently hiring out the writing of his 20-page term paper. He claimed the feminist professor he hired had agreed to write his paper for him. (A claim she denied.)

Kashani claims he wasn’t looking to go viral. “It just happened.” Yet when asked why he wasn’t just honest, Kashani told me a story about responding on his Facebook page to a Guardian article. He claimed that the article’s author linked to his Facebook comment and he was harassed for days and sent glitter bombs in the mail. He noted that he was afraid to tell the truth for fear of harassment. “The Internet can be mean,” he said.

But as it turns out, he’s not Kashani either. Later, in a third call, Kashani admitted that his real name is Nader Modgeddi and that this was all just a joke he claims went “horribly wrong.” Modgeddi also claimed in the third call that he is not a UCLA student and graduated from the University of Pennsylvania. He also admitted to being convicted of a white-collar crime when he was 19.

All of this would just be some simple Internet hoax gone awry, except that Schermer/Kashani/Modgeddi, whoever he is, has a history of harassing women online.

A Tumblr account dedicated to calling out online male violence has screenshots of Modgeddi’s threatening tweets toward women, calling them sluts and whores and other abusive language. This is in addition to a campaign of abusive tweets he sent to activist Caitlin Roper.

It is also worth noting that the name that comes up when I reverse look-up his number is Mehri Modgeddi.

And he was convicted in 2008 for passing bad checks and sentenced to three years’ probation. 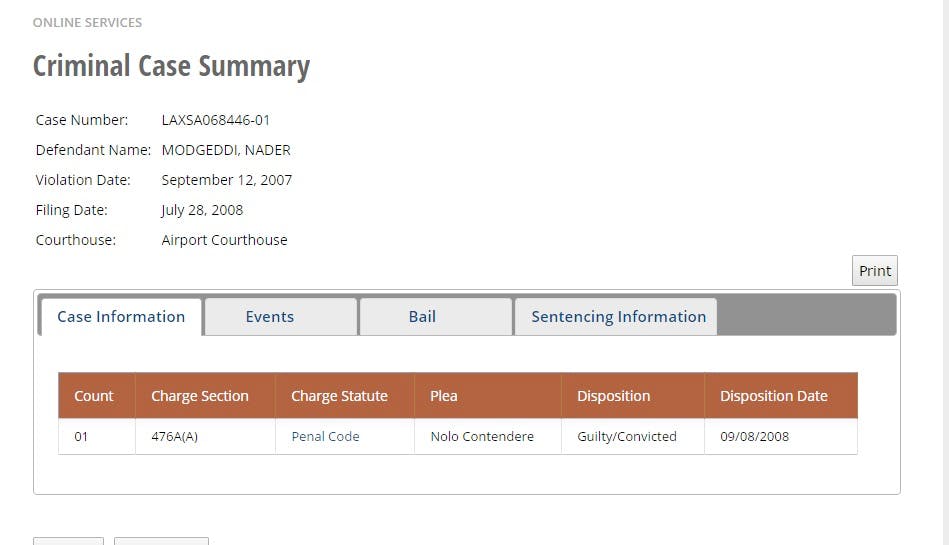 I spoke with the man, who we’re calling Modgeddi now, three times, and we exchanged numerous text messages. In each conversation, he grew more and more demanding of me and my time, telling me I was getting the story wrong, that I wasn’t looking hard enough and insisting that he only speak to me over the phone, but did not want our conversation to be recorded.

In one interview, he told me that he wanted his original ad to “get the attention of the Internet.” However, when I brought up that phrase in another conversation, he denied it. 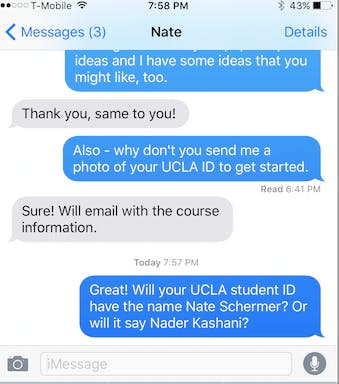 Modgeddi was even gleeful about the negative comments on the article posted about him on Jezebel, noting, “Women say they are feminist but don’t support other people or see them as human. See, that’s not real feminism.”

His sentiment is, of course, ironic considering the abuse he’s meted out in the past. And when I later pointed out that the truth of his story and character was actually more insidious than Jezebel’s comments implied, Modgeddi was upset. “You act like I’m some sort of manipulator!”

“You understand nothing,” he told me.

Update 8:25 pm CT, April 2o: After this story was published, UCLA’s Department of Gender Studies sent out an email to its students this evening warning of Nader Modgeddi and his other aliases, including Alex Rose, who had not only posted this most recent Craigslist ad, but who has been involved in “other incidents over the past year of students receiving emails from a mother seeking a tutor for her UCLA student child.”

Modgeddi also contacted our writer again this afternoon in a lengthy email, which culminated in: “Moral of the story: Dear Internet—know a troll when you see one.” He also let us know that he was “off to sip carrot juice at the Polo Lounge and laugh some more with friends.”