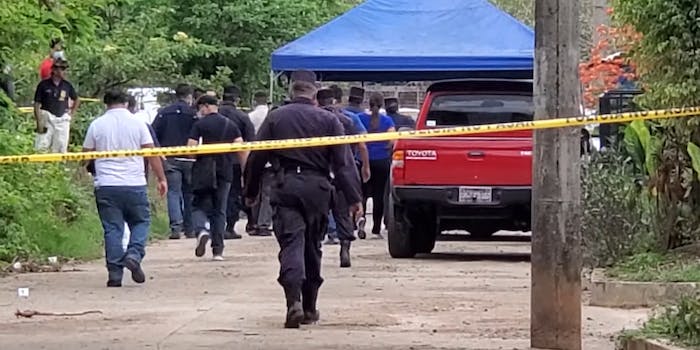 Forty bodies are believed to be buried in his yard.

El Salvador officials revealed last week that authorities were unearthing shallow graves found at the house of a former police officer, who is accused of killing at least two people. The graves are reportedly believed to have held up to 40 bodies, believed to be primarily women, and the homeowner was arrested and charged with two women’s murders.

According to the Guardian, neighbors of the man reportedly heard the cries of a woman, leading to his arrest and the discovery of a mass grave on May 7. The screams are reportedly believed to have come from 26-year-old Jacqueline Cristina Palomo Lima. The mass grave highlights the ongoing crisis of femicide throughout Latin America and beyond. El Salvador, specifically, is considered one of the most dangerous places in the world to be born a woman. According to the Organization of Salvadorian Women for Peace, 541 disappeared in just 2019 alone. The Institute of Legal Medicine reported 468 femicides in 2017, one every 18 hours.

Once police arrived, the woman and her mother, Mirna Cruz Lima, were already dead. The Guardian reports the women were “reportedly bludgeoned to death with an iron tube by [51-year-old Hugo Ernesto Osorio Chávez], who confessed to the crimes.” Osorio Chávez, along with nearly a dozen others, is accused of aggravated femicide and aggravated homicide, according to the Independent.

Local police subsequently found “half-buried bodies of two men in the house’s patio and, when they started digging, found more corpses below in a series of pits.”

Global News reported that “remains of at least 24 people have been recovered so far at [Osorio’s house] in the municipality of Chalchuapa, about 48 miles (78 km) northwest of the capital, San Salvador.”

“The central axis of the investigation is sexual violence,” prosecutor Graciela Sagastume told the press of the femicide phenomenon, per Global News.

Per the Guardian, it appears most of the victims were young women who Osorio is accused of enticing into his home by promising work in Mexico. According to the Independent, Osorio Chávez allegedly found the victims on social media.

However, “at least three were young children aged two, seven and nine.” Nine additional suspects have been arrested, including human traffickers, former police, and ex-military members, “fueling suspicions Osorio also used his clandestine cemetery to dispose of other people’s victims.”

Though femicide and abuse are also prevalent in Mexico, the country is reportedly viewed as somewhat safer than El Salvador, Guatemala, and Honduras.

According to a Wilson Center report, the crises of femicide and broad abuse of women appear to have been “exacerbated” by the coronavirus pandemic, which essentially trapped women, children, and other potentially vulnerable people with abusers in many cases.