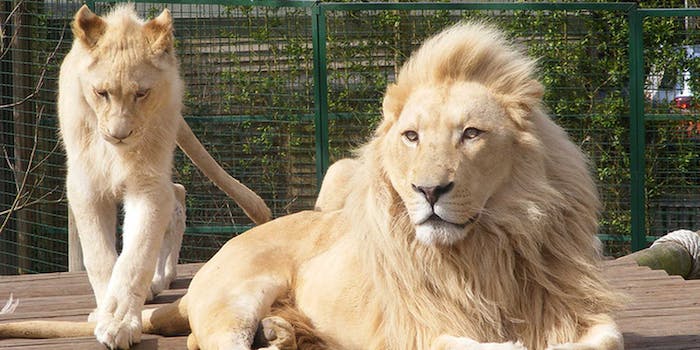 One lion might have fallen, but there are plenty left to celebrate.

The murder of Cecil the lion put the king of the jungle at the top of everyone’s minds and made this year’s World Lion Day that much more significant.

Since 2013, the World Lion Day campaign has been working to raise awareness of and foster support for the endangered species. They wrote on their Facebook, “Today is World Lion Day. Today we hope to all stand together to celebrate the world’s most iconic species. Today we hope to make a difference. Let us use passion, outrage, fascination, admiration and even moments of anguish proactively. Let us support those working to save the King of Beasts and his kingdom.”

While the world continues to demand that Cecil’s killer, Dr. Walter James Palmer, face the penalty for his crimes in Zimbabwe, others have used World Lion Day 2015 to support living lions and celebrate Cecil’s majestic nature.

Hey #Perth! You can help me save Big Cats tonight at my @Natgeo talk @STC_of_WA with a high five to honor #WorldLionDay. To participate in the worldwide Virtual High Five take a photo of you highfiving your pet, your bestfriend, partner whoever! Then tag it with #5forBigCats. You can take it a step further and donate $5 to @NatGeo's Big Cats Initiative linked in my bio. Here is a mom and cub hanging out on a tree branch- shot for my upcoming @natgeo story on leopards coming in the Dec 2015 issue and for a @NatGeoWILD TV show. @stevewinterphoto @natgeo #5forbigcats #bigcatsforever @bertiegregory @canonuk @zacuto @cameracorps @syrp_ @sachtler @leefilters @KEEN @pteclights @thephotosociety #NGcreative #onassignment #bebright #uneek #iamuneek#wildlifeconservation #inthefield #wildlfephotojournalism # BCI #bigcatsinitiative #kulusafaris #harithasl @mayakoba http://animals.nationalgeographic.com/animals/big-cats-initiative/high-5-give-5/

The lion population in Africa has declined by 90 percent in the last 75 years. So while National Mojito Day and Snowman Burning Day might not be worth your time, the king of the jungle deserves a little respect.

Photo via monkeywing/Flickr (CC BY 2.0)