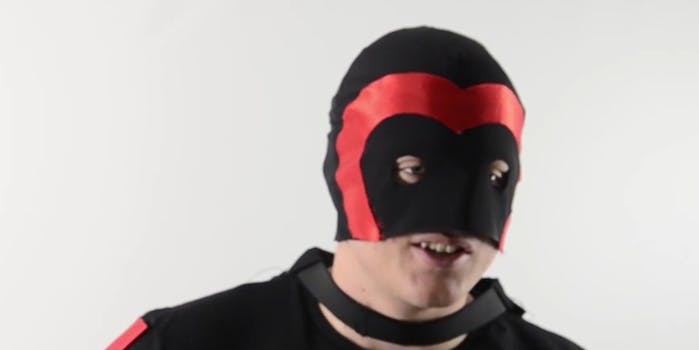 A mysterious Englishman has taken on the identity of Captain Manchester.

Since early September, an Englishman has been using Twitter to reach out to his community, and practice random acts of kindness. And he’s been doing so as a superhero character named Captain Manchester.

After the mysterious Mancunian was laid off from his job, he created the Captain Manchester persona and began patrolling the streets, clad in a red and black outfit he made himself. He showed off the disguise last month:

The missus has fell asleep. Here’s my outfit so far. After some black and red gloves… pic.twitter.com/3HGa3VR32y

In true superhero style, even Captain Manchester’s “missus” doesn’t know his secret identity. His Twitter account details his double life, and the good deeds he’s done. According to English website Huddled, Captain Manchester’s “handed out free umbrellas in the rain, paid a motorist’s parking penalty for them, [and] helped people move heavy furniture.” His services have become so popular, he even had business cards made.

Captain Manchester told the Oldham Evening Chronicle that he’s always been a fan of comic books and decided to use his free time to make a difference, even if his disguise isn’t perfect:

“Sometimes I wear the outfit and sometimes I don’t. The costume is just a bit of fun and its made out of what I had available in my house. I’m not the greatest at costume design.”

“We decided a comic would be a good way of doing that, getting an outfit and going out and just being nice to people would be a lot of fun and a great way of getting people involved.”

For now, however, Captain Manchester carries on with his good deeds. The proceeds of the comic will, of course, go to charity.