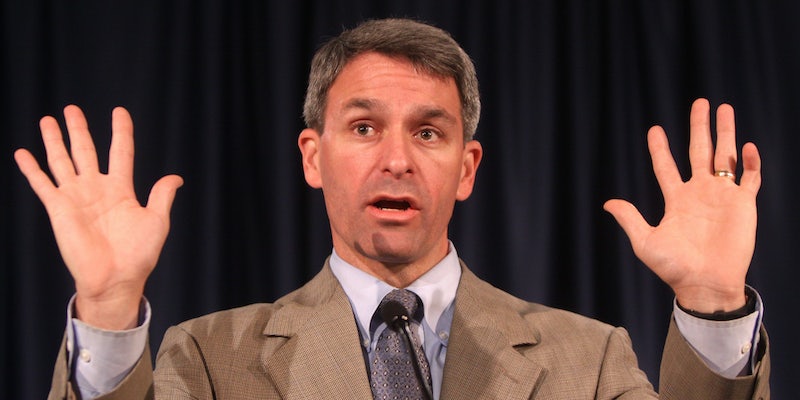 His remarks about the poem on the Statue of Liberty were not met well online.

Calls for U.S. Citizenship and Immigration Services Acting Director Ken Cuccinelli to resign were trending on Twitter under the hashtag #CucinelliResign Wednesday on the heels of him making remarks about the poem on the Statue of Liberty.

Cuccinelli made one of his claims during a CNN interview on Tuesday after he was asked what he thought America stands for.

“Well, of course that poem was referring back to people coming from Europe where they had class based societies, where people were considered wretched if they weren’t in the right class,” he said.

Cuccinelli: That statue of liberty poem was about "people coming from Europe." pic.twitter.com/nrDcUGJsU3

In a separate interview with NPR, the acting director also suggested that the lines from the poem should be changed to “give me your tired and your poor who can stand on their own two feet, and who will not become a public charge.”

Here's acting USCIS director Ken Cuccinelli saying on NPR this morning that the Statue of Liberty plaque should be changed to read, "give me your tired and your poor who can stand on their own two feet, and who will not become a public charge." pic.twitter.com/q8OoNn3k6r

The original poem, The New Colossus, was written by Emma Lazurus in 1883. The line Cuccinelli added to reads: “Give me your tired, your poor, Your huddled masses yearning to breathe free, The wretched refuse of your teeming shore. Send these, the homeless, tempest-tost to me, I lift my lamp beside the golden door!”

Cuccinelli’s remarks were blasted by a number of people online, including 2020 Democratic hopeful Beto O’Rourke.

“This administration finally admitted what we’ve known all along: They think the Statue of Liberty only applies to white people,” O’Rourke tweeted.

This administration finally admitted what we’ve known all along: They think the Statue of Liberty only applies to white people. https://t.co/kTLl50yCmw

The 2020 candidate wasn’t the only one. On Wednesday afternoon #CucinelliResign was trending on Twitter.

As Italian descendants of immigrants, @USCISCuccinelli, we can’t succumb to the White Supremacy that would have excluded our own families from the American Dream. We will not allow you to rewrite poetry or history. For the sake of immigrants past and present, #CuccinelliResign! pic.twitter.com/JEvdmoeqGu

#CuccinelliResign Trump and his evil ninnies are trying to change who we are as a country! If you are not outraged then you are not paying attention!

This isn’t the first time a Trump administration official has had a brush with the famous poem. In 2017, Stephen Miller had an exchange with a CNN official where he said that the poem was added after the statue was erected, seeming to brush off the importance of it.