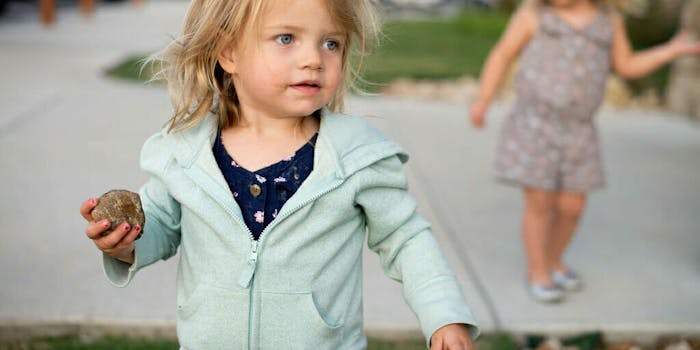 Girls have things to hold too!

Author Heather Kaczynski has a three-year-old daughter who loves to carry around things like “rocks and Power Rangers.” However, her daughter’s pants either have fake pockets or lack them altogether.

So in response, Kaczynski turned to Twitter on Friday, begging clothing manufacturers to create more pockets for girls. She’s since gone viral, with over 60,000 retweets and 240,000 likes on her post.

The internet quickly agreed. Women’s clothing notoriously lacks pockets, suggesting that female fashion is designed for the viewer first and the wearer second.

By designing kids’ clothing with fake pockets, those harmful, gendered stereotypes are just being forced onto young girls as they’re growing up.

At 4, my kiddo had a pair of pants she always wore backwards because there were functional pockets in back and stupid sewn up nothings in front.

Literally why I only buy my niece overalls from the “boys” section. She needs a place to keep twigs, apple slices, and her teddy bear’s secrets

Before I became a dad I didn’t realize how much parenting involved rock inventory management. Pockets in kids clothes are non-negotiable.

THIS! And tbh I STILL put things down my shirt when I lack pockets. Nobody can convince me that is not the intended use of bras. 🤷‍♀️

I was spoken to at little ones nursery once. They were concerned she'd been putting things in her kinckers toys etc. I asked her about it "it was my builders belt and they were my tools. I was being a builder like daddy." Legend

I resent that as a woman I am not expected to want pockets I think it really affects things like exercise. You still have keys, random receipts and free shit you have collected. How many women even want a handbag!?

Even boys have this problem. Apparently, no one in the fashion industry realizes kids need to carry their rocks or superhero figures.

Some of my sons’ pants have fake pockets, too. Grrr.

why do they do this to us?! kids care less about fashion and more about FILLING THEIR POCKETS WITH ROCKS

And because I'm big on pockets (8 on my jacket, 5 on my pants, and I'm carrying a backpack for the 3y.o.) it takes time to find them again.

There are also half a dozen rocks and sticks sitting in the car trunk.

We’ve had some boy pants without pockets, and 4yo is quite annoyed.

Kaczynski has since used the opportunity to promote companies that sell dresses and pants for young girls that have pockets.

I've been mostly ignoring this thread because woah, you all really love pockets! But since so many great recommendations have come up for places to actually buy pockets for girls, I'm going to start listing them here. First: @princess31415 https://t.co/YxC7tTzkuZ

It looks like this company has girls' dresses with pockets too https://t.co/WqWECZK8bt

For adult dresses with pockets, @cherryvelvety is amazing. They are high quality, beautiful, and have great colours/patterns.

Let’s just agree that everything is better with pockets: jumpsuits, lingerie, wedding dresses, shoes, even underwear.