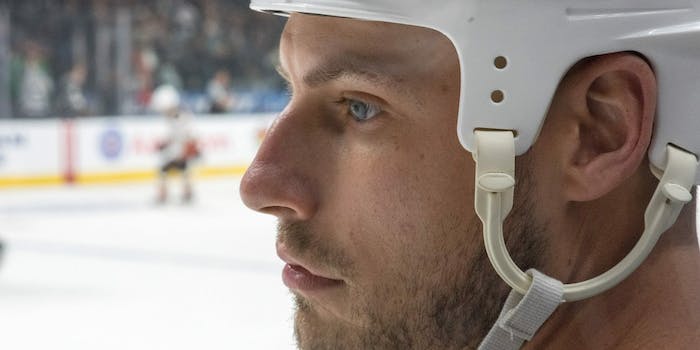 He didn't exactly apologize for saying it, either.

Ryan Getzlaf is a captain for the Anaheim Ducks, who are currently locked in a tight playoff series that could take them to the Stanley Cup finals.

While Getzlaf has historically been one most well-respected players on the squad, last Thursday, he called someone a “fucking cocksucker” during game 4 of the series. Instead of suspending him, the NHL only fined him $10,000.

Now a Ducks fan has set up a GoFundMe page to help with Getzlaf’s penalty, downplaying that the word in question is a gay slur. On a page titled “Getzlaf Potty Mouth,” the page’s creator Jason Lamb wrote, “Ryan Getzlaf was unfairly given the maximum fine by the sinister NHL for accurately calling a ref a rooster vacuum. Now if everyone donates just $1 we can raise enough money to send a message to the NHL that no more will this kind of snowflake over reaction [sic] to words stand.”

Lamb wrote that the money would be donated to charity, but it’s not difficult to understand why the league punished Getzlaf.

Getzlaf drops the "f**king c***sucker". This is ok right? pic.twitter.com/85tOgFsdYK

If the @NHL isn’t going to do the right thing, the @AnaheimDucks should suspend Getzlaf. Now three parties deserve to be skewered.

Wrote USA Today: “If the NHL truly wants to rid the game of sexist, homophobic and demeaning language, they need to be consistent with their punishments, not vary them according [to] subjective judgments on how hurtful the language may be or who the player is.”

As the league said in a comment when announcing the fine, “Getzlaf’s comment in Thursday’s game, particularly as directed to another individual on the ice, was inappropriately demeaning and disrespectful and crossed the line into behavior that we deem unacceptable. The type of language chosen and utilized in this instance will not be tolerated in the National Hockey League.” But it didn’t elaborate why Getzlaf wasn’t suspended.

Apparently, that kind of language is not a problem for some of Getzlaf’s fans, though. As one person wrote on the GoFundMe page, “Don’t need this Bullshit in Hockey, Get this Libtard bullshit out of here!!!”

As for how Getzlaf felt about it, here was his non-apology: “There were obviously some words said, not necessarily directed at anyone in particular, it was just kind of a comment. I’ve got to be a little more responsible with the words I choose,” he told reporters. “As a father, as somebody who takes a lot of pride in this game, it’s tough to see somebody refer to it as what [the TSN channel] did. I didn’t mean it in that manner in any way, and for that to go that route was very disappointing for me. I accepted responsibility and I accepted it fine. We talked to the league and I understand it’s my responsibility to not use vulgar language, period, whether it’s a swear word or what it is. … I hope I didn’t offend anybody outside the circle that we trust.”

As Out Sports points out, Getzlaf made $9.25 million this year. Which means, after firing off at least one gay slur on a nationally televised broadcast, the league fined him just .01 percent of his salary.