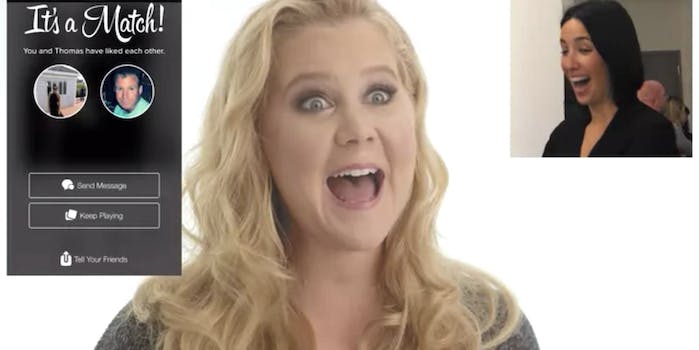 'Always swipe left on a comedian!'

Amy Schumer has a few strict rules when it comes to Tinder: Give redheads who aren’t too red a chance, always swipe left on comedians, and always, always swipe right on dogs and babies.

These rules and many more insights are revealed in a new Vanity Fair video where the famously brash comedian takes over the Tinder of writer Andrea Cuttler. Whether she’s seducing a firefighter with sultry opening lines like “How bout lightin’ my fiya?” or digging deep for details about a pictured dog’s name and breed, Schumer has a not-so-surprising nihilistic attitude when it comes to the dating app we all love to hate.

Cuttler, in the meantime, watches on in varying degrees of shock and embarrassment. It would appear the old adage “the swipe is in the eye of the beholder” is indeed true, because Schumer’s take doesn’t always jibe with what Cuttler herself is thinking.

In the play-by-play commentary Cuttler provides in an accompanying article to the 10-minute-long video, she reveals that guitars don’t actually turn her off, and she wishes Schumer would have swiped right on James: “James! You look like a nice guy. I’m really sorry. Call me!” Cuttler writes.

But mostly, Cuttler just wishes she would have turned off her texts, which reveal her friends spend a whole lot of time discussing “gym and chill.” Ultimately, she muses, the experiment is one of the best times she’s ever had. And she’s hopeful! Who knows what these Schumer-approved matches might lead to?

In the end, Cuttler concludes, “I assume that now that this video is live, I will either find a husband within the week or never date again.”

As for any errors in judgment, Schumer does give a big ol’ disclaimer at the top of the video when she proclaims herself a Tinder virgin. Interesting fact, since sources have reported that she met her current beau on Raya, the “secret” dating app for celebrities. But Schumer also refers to herself as single in the video, so who knows—maybe this was the day that piqued her interest in online dating?