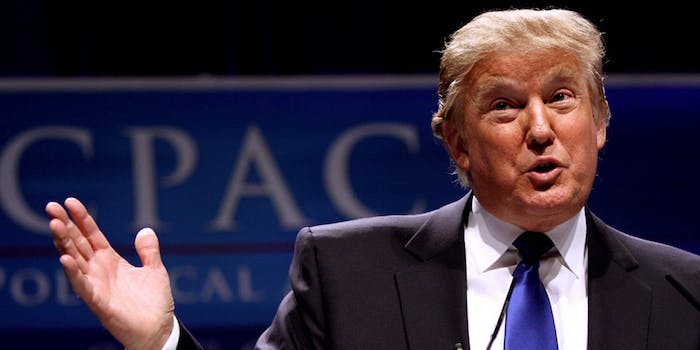 Trump, congresswoman call each other liars over his phone call to soldier’s widow

President Donald Trump called the widow of a soldier who died in Niger and told her he “knew what he signed up for,” according to a congresswoman who overheard the conversation.

Rep. Frederica Wilson (D-Fla.) said she was with Myeshia Johnson in a car traveling to meet the casket of Sgt. La David T. Johnson, 25, when Trump fulfilled his promise to call the families of soldiers killed in action. Wilson said she heard part of Trump’s call on speakerphone.

“Basically he said, ‘Well, I guess he knew what he signed up for. But I guess it still hurt.’ That’s what he said,” Wilson said in an interview with CNN.

“Democrat Congresswoman totally fabricated what I said to the wife of a soldier who died in action (and I have proof). Sad!” Trump wrote on Twitter.

Democrat Congresswoman totally fabricated what I said to the wife of a soldier who died in action (and I have proof). Sad!

It was not immediately clear what Trump’s “proof” was. However, he has made claims of having tapes of conversations in the past before denying that they existed.

Johnson was one of four soldiers killed in Niger after an ambush, according to officials.

When asked about the attack earlier this week, Trump claimed that former President Barack Obama and others did not call the families of soldiers that died during combat, a claim that was denounced by former staffers and was swiftly backtracked by Trump.

After Trump’s denial of saying that Johnson “knew what he signed up for” Wilson told CNN that she had “no reason to lie” about what he said.

“I’m not trying to prove anything with the president,” she said. “So the president, evidently, is lying. Because what I said is true. I have no reason to lie.”

Wilson said the widow “broke down” after receiving the call from Trump.

“She said, ‘he didn’t even know his name,’” Wilson recalled.

Rep. Wilson says the widow "broke down" after her call with Trump, saying "he didn't even know his name" https://t.co/NH32B5q7pC

She added, “This man is a sick man. He’s cold-hearted and he feels no pity or sympathy for anyone.”