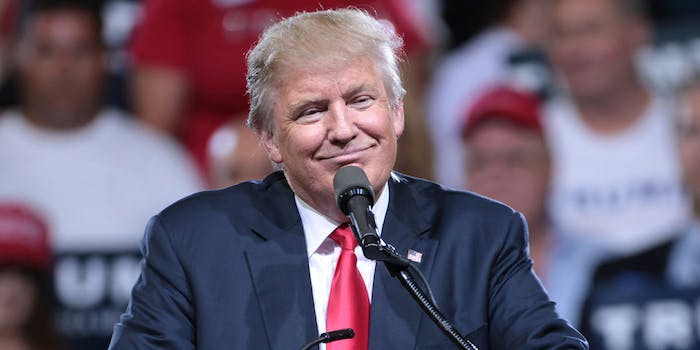 Well this is ominous.

On Veterans Day, during a question and answer session with the press on Air Force One, President Donald Trump called the former CIA Director and former Director of National Intelligence ‘political hacks.’

Trump was asked about a private meeting he had with Russian President Vladimir Putin at the Asia Pacific Economic Cooperation summit and said that Putin again denied that Russia in any way interfered with the 2016 election.

“He said he didn’t meddle—I asked him again,” Trump said, per the New York Times. “You can only ask so many times. I just asked him again. He said he absolutely did not meddle in our election. He did not do what they are saying he did.”

“I mean, give me a break—they’re political hacks,” Trump said. “You have Brennan, you have Clapper, and you have [former FBI Director James] Comey. Comey’s proven now to be a liar, and he’s proven to be a leaker, so you look at that. And you have President Putin very strongly, vehemently says he had nothing to do with that.”

Trump then went on to say that if Democrats continued to investigate Russian meddling, people would die.

“Having a good relationship with Russia is a great, great thing. This artificial Democratic hit job gets in the way, and that’s a shame, because people will die.”

Update 12:55pm CT, Nov. 11: The CIA released a statement in response to Trump’s claims, saying that Director Mike Pompeo stands by the intelligence community’s assessment that Russia interfered in the 2016 election.

“The director stands by and has always stood by the January 2017 intelligence community assessment entitled: ‘Assessing Russian Activities and Intentions in Recent U.S. Elections.’ The intelligence assessment with regard to Russian election meddling has not changed.”