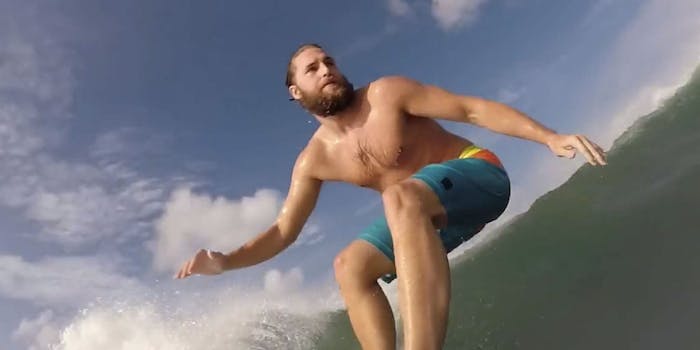 The home movies of the future may be directed by artificial intelligence.

Shred Video is a company that makes smart video editing software to take the pain out of putting together a finished movie with cuts and music. For now, it is aimed at adventure-seekers, those who might strap GoPro cameras to their heads and go surfing or snowboarding. With little more than the push of a button, software can turn this collected footage into dynamic, professional-looking videos.

“There’s a basic formula to these types of sports movies,” Shred Video CEO Mike Allen told the Daily Dot over the phone. “The introduction song is paired with establishing shots of local markets or of arriving at the beach. Then during the chorus or beat drop, the intensity builds. That’s when you drop in the best action footage. This describes almost every snowboarding movie.”

The software’s artificial intelligence algorithms work to replicate this aesthetic, analyzing user footage to get a sense of what ought to go where in the finished product.

The OS X app was released in late July, and a video walkthrough shows that it is remarkably simple to use. Those wanting to turn their disparate action clips into a cohesive movie to share with friends only need to pick a song, drop a bunch of recorded footage into the app, and click a button that says “Shred.” The software automatically identifies the best and most worthwhile pieces of video, editing out parts that are unusable or less interesting.

It’s intelligent enough to insert cuts exactly to the beat of the music, and if you want to lightly tweak the finished product, you have some options there as well. Allen tells us the ability to fine-tune videos will be greatly enhanced in the future.

“We see ourselves as turning average camera users into pro editors and composers,” Allen said. “Most video editors require big upfront investment and don’t know what you’re going to get.” Shred Video is completely free to use, and if you’d like to save the video it edits for you, it only costs a dollar. Allen tells us this business model will evolve over time.

Allen is a self-described “total amateur surfer and skiier, and a GoPro user for years.” Here’s an automatically edited-together video of Allen’s own vacation footage from a recent surfing trip to Nicaragua.

All he had to do to generate the video was capture the footage, enjoy himself, and click “Shred.”