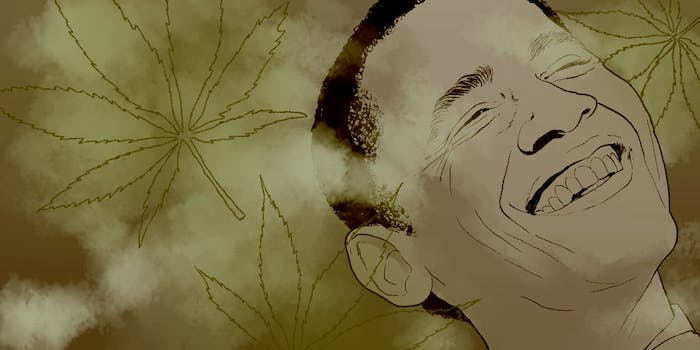 You don't get higher praise than this (politically speaking).

President Barack Obama and several other lawmakers have signaled their support for a Senate bill that would federally legalize medical marijuana.

Speaking to CNN’s chief medical correspondent, Sanjay Gupta, about Senate Bill S.683 —the Compassionate Access, Research Expansion, and Respect States Act of 2015, also known as the CARERS Act—Obama expressed support for the legislation, which would decriminalize medicinal cannabis across the country, open access to mainstream banking for dispensaries, and reschedule the drug from Schedule I to Schedule II, a lower classification that acknowledges the substance’s medicinal uses.

“You know, I think I’d have to take a look at the details,” Obama said when asked by Gupta about the bill. He added: “I’m on record as saying that not only do I think carefully prescribed medical use of marijuana may in fact be appropriate and we should follow the science as opposed to ideology on this issue, but I’m also on record as saying that the more we treat some of these issues related to drug abuse from a public health model, and not just from an incarceration model, the better off we’re going to be.”

The CARERS Act was introduced in March by Sens. Cory Booker (D-N.J.) and Kirsten Gillibrand (D-N.Y.) along with Sen. Rand Paul (R-Ky.), who recently announced his run for the White House in 2016 and has historically fallen in line with liberals on issues of marijuana legalization.

Booker told Gupta: “We now have had three presidents that have admitted to smoking marijuana. People that are in public office all throughout the Senate have said, ‘Hey, I’ve smoked marijuana recreationally.’ How much of a hypocrite do you have to be to say that ‘I broke American laws using pot as a recreational thing’ and that ‘I’m not going to support this idea that as a medicine for severely sick people, that they shouldn’t be able to access this drug?’”

In CNN’s new documentary Weed 3: The Marijuana Revolution, the president, who’s admitted to using pot and other drugs recreationally in the past, argued for America approaching marijuana the way we’ve approached tobacco and mandatory seat-belt laws.

“One of the great victories of this country has been our ability to reduce incidences of smoking, increase the incidences of seat belt use,” Obama said. “You know, we save tens of thousands, hundreds of thousands of lives every single year. We didn’t throw anybody in jail; we just made sure that they were well-informed. And if somebody has an addiction, we made sure that we made it easy for them to get help. And I think we need to re-emphasize that approach, because we don’t want to encourage our kids to engage in drug use, but there are going to be more effective ways than, too often, the approach we’re taking today.”

A poll from CBS released on Monday showed that 53 percent of Americans are in favor of legalizing marijuana, more than ever before.