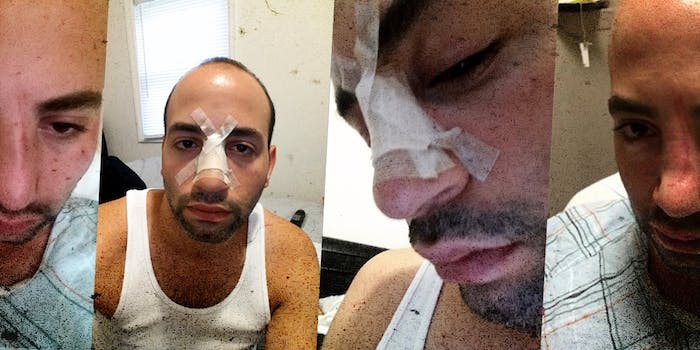 It's the second time in a month that NYPD officers have been accused of homophobic attacks.

Louis Falcone is shaking his head and sighing uncomfortably as the video of four NYPD officers beating him plays on a flat screen over his head.

A 30-year-old, soft-spoken cook and caterer, Falcone is talking to reporters on Tuesday at his attorney’s office overlooking Zuccotti Park in New York’s financial district. His attorney, Eric Subin, has just announced that he’ll be filing a $25 million lawsuit against the New York Police Department, the City of New York, and the four individual officers who beat Falcone so badly that he was hospitalized with a broken nose and other wounds. 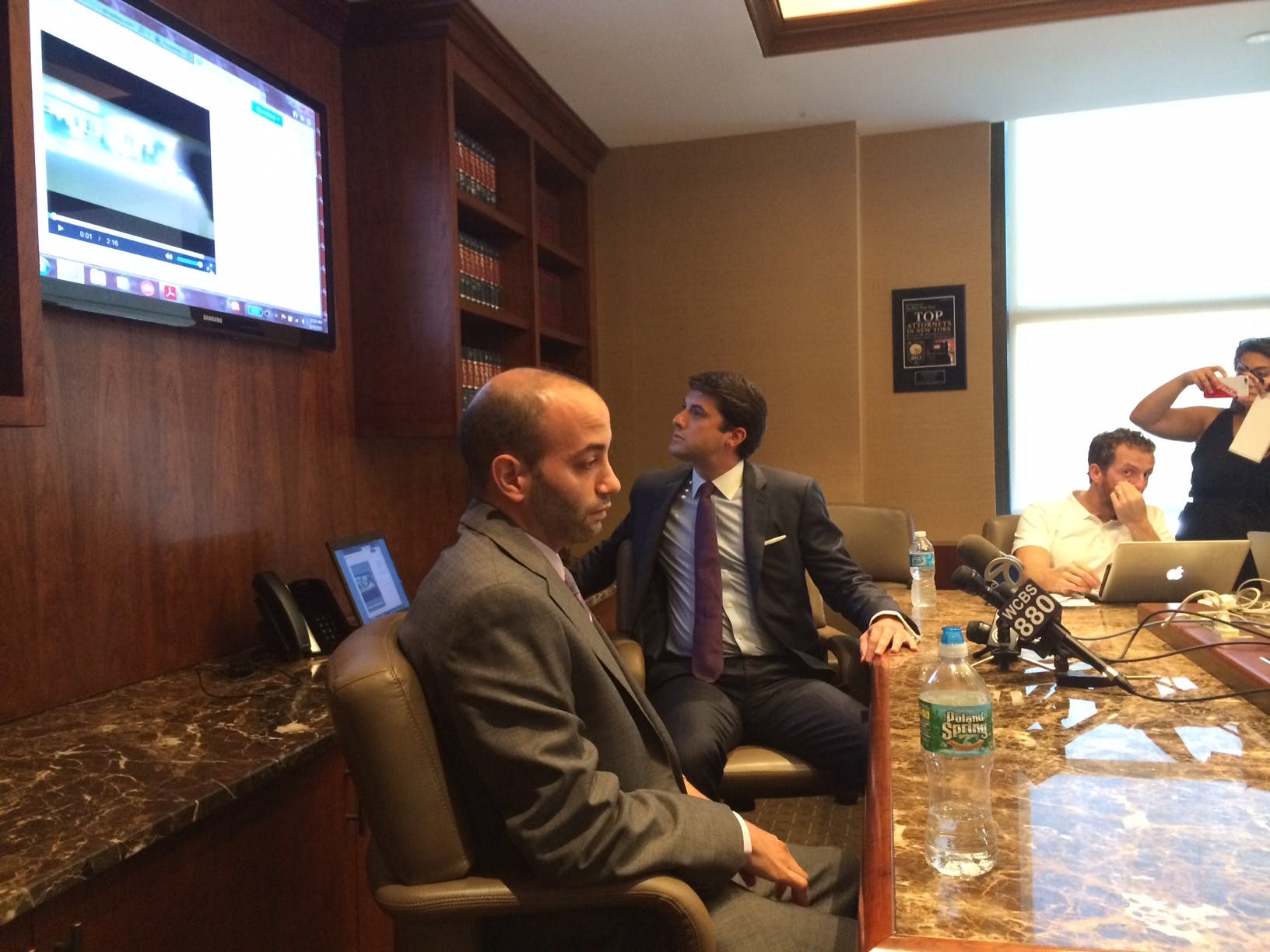 In the claim, the four officers (whose identities are not yet public) are charged with police brutality, excessive force, and a civil-rights violation. The last charge is one that could take a case of police aggression into the realm of hate crime. Falcone—who is gay—says that while the cops were pummeling him, he was repeatedly called “fag” and “faggot.”

“Don’t get it on you,” said an officer of Falcone’s blood-covered face and hands during the beating, according to Falcone. “The faggot probably has AIDS.”

“I’m disturbed as a person, as a gay man, as a human being just to see this happen to somebody—even if it wasn’t me.”

Falcone says he woke up at around 5am on June 19 to find cops at his mother’s door in the Midland Beach neighborhood of Staten Island, New York. After Falcone’s brother, Scott, had come home drunk, the brothers had a tense verbal argument and his mother called the police. Scott left, and Falcone and his mom went back to sleep—to be awoken about an hour later by the NYPD.

The situation rapidly escalated when Falcone answered the door and his dog began to bark at the officers.

“I said, ‘Oh, he already left and everything’s OK.’ They said ‘Come outside, now,” Falcone tells a group of reporters. “My dog started barking, and the cop said ‘Shut that dog up or I’ll fucking kill it.’ And as he said that, he reached for his gun. I said, ‘Oh my god,’ and turned and said, ‘Looch, go inside, go inside.’ And that’s when they opened the door and yanked me out.”

The beating itself was captured on camera by a neighbor across the street, who shot footage quietly from between his window blinds. In the video, officers are seen dragging Falcone out of his front door and slamming him to the ground.

Falcone can be heard screaming for help as he is kicked and beaten. His mother, Catherine, whom Falcone described as “very old and frail,” is seen standing in the doorway while officers throw her son to the ground. At one point, according to Falcone, the officer seen at the far right stomps on the white surgical boot Falcone was wearing at the time due to a recent foot surgery.

“I’m very emotional over this whole situation,” says Falcone. “I look at it, and I’m disturbed. I’m disturbed as a person, as a gay man, as a human being just to see this happen to somebody—even if it wasn’t me. It’s just crazy how these cops act.”

Falcone says he woke up later that day at Staten Island University Hospital, where photos were taken of his various wounds. He remembered asking, “Where are the cops?” But the police had disappeared at some point before he woke up. Falcone was never charged or arrested. This was, he says, the first time he’d even had an interaction with police in his life. 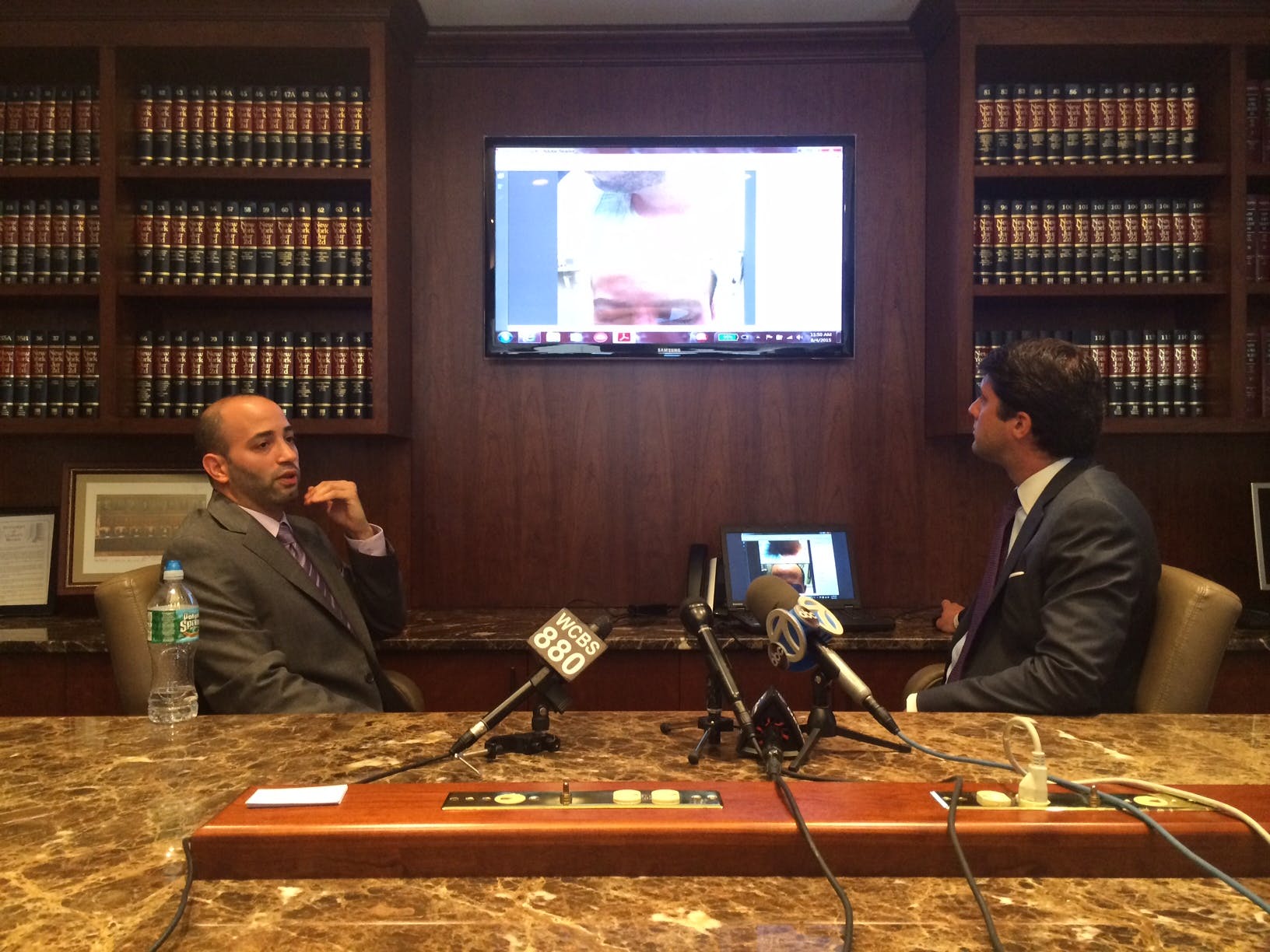 A spokesperson for the NYPD told the Daily News on Friday that Falcone had already been injured when officers arrived at the house, and that he spit blood in an officer’s face as they attempted to restrain him.

“Falcone became belligerent and uncooperative. He appeared to have been injured in the fight with his brother. As the officers attempted to subdue him, he resisted and spit blood in the face of one of them. The officers were able to restrain him and he was transported by EMS to a local hospital for evaluation.”

Falcone vehemently denies the claims, saying that the argument with his brother had never gotten physical and that the idea of him spitting in an officer’s face was “disgusting to me” and untrue.

“My brother never hit me, not even growing up,” Falcone says. “I was his best friend, little buddy. He would never put a finger on me.”

Now, almost two months after the incident, Falcone says he’s retained some pain from his injuries. “I still feel like I got beat up just yesterday,” he says.

Subin, Falcone’s attorney, says the case was being reviewed by NYPD’s Internal Affairs bureau. On Wednesday, he says, Falcone will appear before the city’s Civilian Complaint Review Board.

“These guys are criminals. They belong in jail,” says Subin. He tells reporters that as soon as he can confirm the identities of the officers involved, he planned to contact the civil-rights division of the District Attorney’s office.

Falcone’s case is the second time in a month that NYPD officers have been hit with allegations of violent homophobic attacks on LGBT New Yorkers. On July 11, a black lesbian couple in Brooklyn were walking home from a concert when, they said, off-duty officer, Salvatore Aquino, called one a “fucking dyke” before punching her in the face, ripping her clothes, and choking her so hard she said she thought she was going to be killed.

Online, the public called for change at the NYPD and pointed to the gaps left in LGBT civil rights after marriage equality.

NYPD dragged, beat, called #LouisFalcone a faggot. But don't worry it's all good, we can marry now. Right @HRC? http://t.co/xHfaNztjBM

Only US cops could drag someone out of bed at 5am in their pj's, beat the shit out of them, then later say they were provoked. #LouisFalcone

When asked by the Daily Dot whether Falcone thought the officers who beat him were aware that he was gay, he says they could “probably tell … by the way I talk.” But he wasn’t thinking about the details at the time—he was thinking about whether he was going to survive being beaten by four police officers in a post-Eric Garner Staten Island.

“All I could think of was Eric Garner,” says Falcone, referring to the 43-year-old Staten Island resident killed by an NYPD officer, who used a forbidden chokehold to restrain him, last summer. Falcone explains that, like Garner, he couldn’t breathe during the attack, this time because an officer’s foot was on his head, his face buried in mud.

“He didn’t make it out,” Falcone says, “and one more move, I might not have made it.”