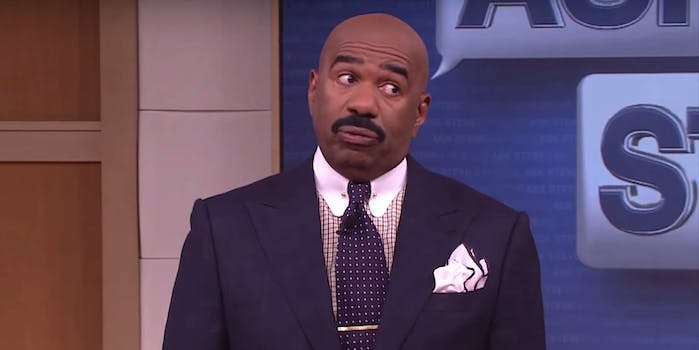 Why the Internet should campaign to #CancelSteveHarvey.

Comedian and daytime talk-show host Steve Harvey is under fire this week for hosting an episode of Steve Harvey aimed at discovering “What Men Really Think.” The two-hour program featured 100 women asking for relationship advice while the 2,000-plus men in the audience shouted their disapproval. One woman was booed for denying her husband sex, most were catcalled or booed depending on their looks, and things got so bad the warm-up comedian was forced to interrupt the crowd, which he described as “too rapey.”

While the incident has the attention of Gawker affiliates Defamer and Jezebel as well as the Root, the story has largely gone unnoticed at a time when social media has allowed for direct targeting in social justice campaigns. In a stagnant political atmosphere dry of bold ideas, a generation has turned to social victories in their quest for change, targeting a variety of people and behaviors for cancellation, removal, or just general exile.

Somehow, Harvey has built a career of saying very derogatory statements. Yet enjoys hosting spots on two daytime talk shows, a top-rated game show in Family Feud, a blockbuster best-selling book (Act Like A Lady and Think Like A Man) turned into two movies (Think Like A Man and Think Like A Man Too), and a cottage industry as a dating expert. All the while, Harvey avoids the complete and utter ire of the kind of online campaigns faced by many other public figures.

How and what attracts our cultural distaste is always very interesting. While Harvey’s “men-only” hatefest largely escaped notice this week, Twitter found other targets, like Jonathan Franzen. The acclaimed author of The Corrections and Freedom is under fire for saying he very nearly adopted “an Iraqi orphan to figure out young people,” or what Guardian columnist Jeb Lund termed “a collectible human being.”

Before Franzen came Wendy Williams, who faced a hashtag campaign to #CancelWendyWilliamsShow over her derogatory comments about singer Ariana Grande’s appearance. Williams, whose syndicated reruns were playing at the time, said months ago that she’d never look at the singer “as, like, a woman” because “she’ll forever look 12.” Before that came the weeklong tantrum over the death of Cecil the Lion, an evidently beloved refuge animal shot and killed by an American dentist.

When you add up the totality of Harvey’s offenses against these, it’s amazing Twitter doesn’t spend every day publicly disemboweling his reputation. If we put aside the bone-headed vision of putting 100 women to be judged in front of a male-only crowd, Harvey still looks like a rampant bigot and offensive idiot through his own public record.

That’s not where his antics end, however. Harvey also once said on television that gay men cannot be “real men.”  In an interview with HipHollywood, he repeatedly calls Caitlyn Jenner a “he” and says “I can’t wrap my mind around it at all.” He has said he has no female friends because men who are friends with women are just waiting for the opportunity to have sex “because we’re guys.” Harvey has also challenged the notion that women can be honest sports fans telling one woman “you’re just trying to figure out why he picks sports over you.”

That would all fare somewhat differently if Harvey was still a comedian—such tired gender stereotypes are the subject of plenty of hack standup acts. But he actually considers himself a relationship expert, doling out advice to woman as if he has any pedigree or reason to be doing so. (Harvey is actually on his third marriage having been admittedly adulterous to his previous two.) Despite this, he has gone so far as to create his own dating site, Delightful.com, aimed at helping women “become more dateable.”

The one place online that has not let Harvey escape unscathed is, somewhat surprisingly, Reddit. The “community of communities” has burned Harvey to the ground on multiple occasions, usually when a YouTube video entitled “Shit Steve Harvey Says” is reposted to the forum /r/Videos (which has more than 8 million subscribers). At the top of Reddit’s complaints about Harvey is his repeated belief that atheists can have no “moral barometer,” advice to never date an atheist, and skepticism over evolution.

It’s not just comments that make Harvey so flagrantly ignorant, but the entire premise of his career. It seems Harvey’s best advice to women is to become more attractive to Harvey. And this attitude has allowed him to profit enormously career-wise, as he’s steadily become one of the biggest forces in daytime TV. Last April, he walked away with his second Daytime Emmy for his talk show, and Family Feud is regularly one of the most-watched shows in syndication, beating out Wheel of Fortune and Jeopardy for the first time. While that level of success might escape the notice of young-skewing Twitter users and social justice warriors, it’s certainly an enormously fruitful field for Harvey to reap.

His ability to evade online outrage should be greatly contrasted with the swift action many other politicians, pop stars, and even corporations have taken to assuage online protesters over negative portrayals of women.

His ability to evade online outrage should be greatly contrasted with the swift action many other politicians, pop stars, and even corporations have taken to assuage online protesters over negative portrayals of women. Last month Target removed a T-shirt with the word “trophy” on it, creating an association between the female wearer and the term “trophy wife,” after Twitter users pushed back against the shirt’s message. If that’s what we’re willing to do against a T-shirt, why are we silent when someone is crafting their entire career off of dated gender stereotypes?

The episode of Steve Harvey filmed this week, which sounds like it was roughly akin to the “Two Minutes of Hate” from 1984, should be a display public enough to end Harvey’s career, or at least his career as a dating expert. Anyone who facilitates an opportunity for thousands of men to catcall women like some medieval stunt should not be allowed to call himself a “relationship expert” without attracting the anger of millions. Yet, somehow, Harvey continues to make himself rich without facing a single consequence for spreading his outdated beliefs.

Gillian Branstetter is a social commentator with a focus on the intersection of technology, security, and politics. Her work has appeared in the Washington Post, Business Insider, Salon, the Week, and xoJane. She attended Pennsylvania State University. Follow her on Twitter @GillBranstetter. Screengrab via Steve Harvey/YouTube