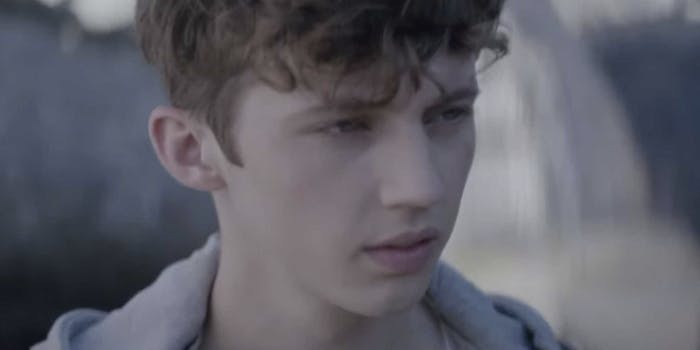 Sivan will perform in eight cities this October.

Brace yourself for heartbreak in Troye Sivan’s newest video for “Fools.”

The clip is the second in the three-part series “Blue Neighborhood,” and it continues the narrative of puppy love between Sivan and his co-star from the “Wild” video into adolescence. The video weaves together shots of the two boys getting intimate and scenes of one boy’s father reacting abusively to his son’s homosexuality. While the lyrics talk about how Sivan sees “a little house on the hill and children’s names,” the two boys are torn apart.

Even though the clip ends with some blatant product placement for HP, Sivan turns that into an essential moment by previewing the dramatic conclusion of the trilogy, which features a funeral. No audio accompanies, but die-hard Sivan fans can probably figure it out by lipreading what Sivan is singing in the clip.

also alsooooo, you guys didn’t think i’d leave tonight at just that did ya??

Sivan coupled the video release with the announcement of his first U.S. tour, which kicks off Oct. 15 in Seattle. Tickets went on sale immediately (Update 4:06pm CT: Tickets sold out within 30 minutes), with Sivan promising that he’ll eventually visit more cities than just the eight available for this run.

Sivan’s most recent EP, Wild, hit No. 5 on the Billboard charts. The first music video from the trilogy has already amassed 4.4 million streams in less than a month.