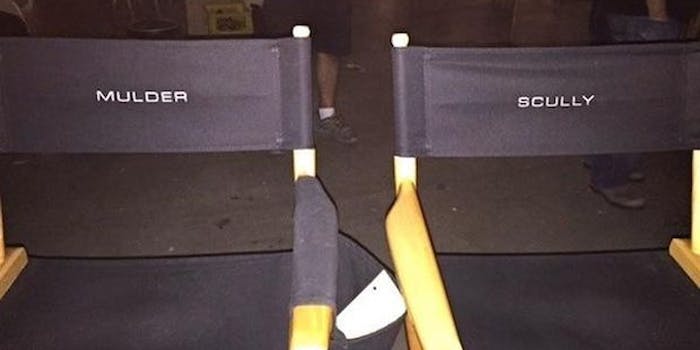 Here’s your first look at the ‘X-Files’ revival

The X-Files revival has started production, and the cast and crew are sharing the first glimpse of Mulder and Scully back together again.

While photos from outdoor filming in Vancouver have already made their way online, teases from stars Gillian Anderson and David Duchovny are enough to start the fan chatter. The six-episode miniseries won’t make it to TV until January, but the truth is out there: It’s being made, nothing big has been revealed, and fans are excited as hell.

It’s been seven years since The X-Files: I Want to Believe, but Twitter and Instagram were nonessential or nonexistent when that was filmed. This time around, the behind-the-scenes looks are coming straight from them.

Although Anderson has used her blond hair in more recent roles, she dyed her hair back to Dana Scully’s trademark red.

And who knew that two chairs would cause so many fans to swoon?

And so it begins… pic.twitter.com/FSDI7W0bMK

Duchovny went with a dark photo of the title page for a script. We can’t really make anything out on it, but it’s right there in front of us anyway.

Look closely even in the dark you see pic.twitter.com/Q1FUlxIH8h

And filming commenced, the X-Files Twitter account gave us our first look at Mulder and Scully—albeit one on a screen. It looks like the duo is sitting in a car together, but why is Mulder dressed the way he is? That’s something we’ll have to wait on.

Community’s Joel McHale, who is guest-starring on the revival as conservative Internet news anchor (and ally to Mulder) Tad O’Malley, has also been sharing some snapshots from the set, but don’t expect him to spoil anything either.

Is he trying to secretly tell us something? Probably not. It just looks like tape to mark where an actor will stand for a particular scene, along with an apple box for Anderson to stand on.

Is it January yet?