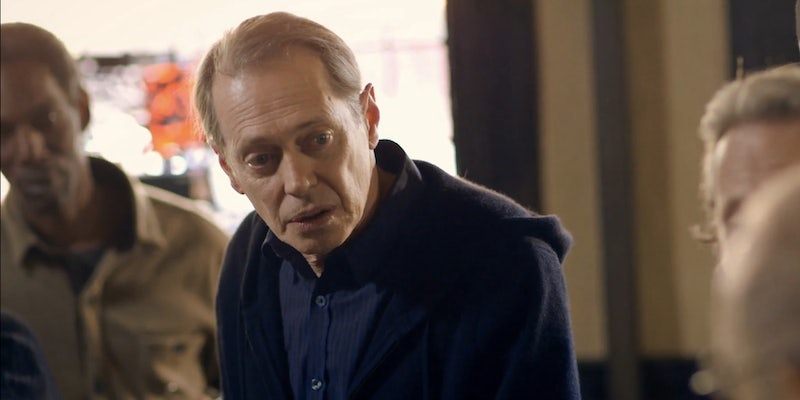 Steve Buscemi’s new webseries sets a high bar for itself

In the opening moments of his new AOL Originals webseries, Park Bench, Steve Buscemi pitches the reason for its very existence to us. You see, as an actor, one must “create your own work [and] make your own opportunities.” It is an interesting conceit, seeing as he surely no longer has to hustle in reality; Buscemi has rarely been out of work in the past 20 years, and it’s no doubt on the back of Boardwalk Empire’s success that he gets the chance to make this series.

It’s this meta-examination of talk shows and TV in general that gives the program its early impetus. It’s funny to see Buscemi brainstorming with his dad, just as it’s great to see him riffing with Chris Rock on potential guests (“Michelle Obama, always great … Janeane Garofalo, great guest”). His show, he says, will be less a talk show and more a “talking show.” But when Buscemi starts pointing out the major problem with modern talk shows, specifically that the guests are only ever there to sell something, you start to worry that he’s creating a point of differentiation that he’ll never be able to maintain.

You are right to worry. Soon he is talking to Rock about the (by his track record, no doubt terrible) movie he is directing. In the second episode, he brings Rosie Perez out from wherever she’s been hiding since White Men Can’t Jump to talk about her recently published memoirs (“I didn’t want to write it, but everyone pressured me”), and in a later episode, Roseanne Cash, who’s touring her latest album, turns up for a very long segment which you’ll very likely skip. Indeed, Buscemi himself, for all the stories that he must have working with the Coen Brothers or even on Con Air, can only seem to spout references to Boardwalk Empire and repeatedly remind us that the last season is coming up.

This may all just be a big joke on the viewer, Buscemi “trying” to be different but incompetently falling into the same old traps as everybody else. It’s one of the overriding jokes of the series that he can’t get hold of decent guests, despite the fact that his brother, also making his own show, has no such trouble. But it seems unlikely that you’d make some of the scenes you see in Park Bench so banal by choice. This is still meant to be entertainment, after all.

It’s a missed opportunity. The moments when the show actually adheres to its original vision, to be a “talking show,” it shines. In those moments when naturally funny people, like Rock and Billy Connolly, are given room by Buscemi, the results are, well, naturally funny, and Park Bench soars above its predictable format.