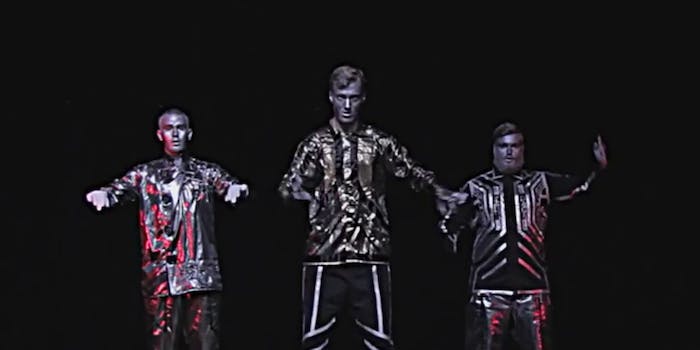 This stunning video will make you pop and lock

Nick Nitro and Jeppe Long are Robotboys, a dance duo from Denmark that orchestrates elaborate, robotic pop-and-lock routines. They participated in and ended up winning 2008’s Denmark’s Got Talent with this routine, but in the last few years, they’ve built up a fandom around their YouTube videos, which consistently receive more than 100,000 views. And they’re starting to pick up fans in America.

In their latest clip, which already has more than 250,000 hits and features the stylings of American dancer Poppin’ John, Robotboys appear on a dark stage, their silver suits the only hint of color or movement. The three bob and weave, using their individual moves to create one solid mass, like parts of an engine all working together, expanding and contracting. Naturally, one YouTube commenter asked if they were “the guys from Workaholics.”

Of course this is all done to dubstep. It can’t be easy to pop to Skrillex (around the 1:50 mark), but they manage to squeeze myriad choreographed moves into a three-and-a-half-minute performance. Maybe they’ll collaborate with Beyoncé.

Speaking of Beyoncé, Robotboys have seeped even further into the American pop culture consciousness: Rapper and producer Pusha T sampled a bit from Robotboys’s track “AuHH: ?dition” for his song “Let Me Love You,” featuring Kelly Rowland.