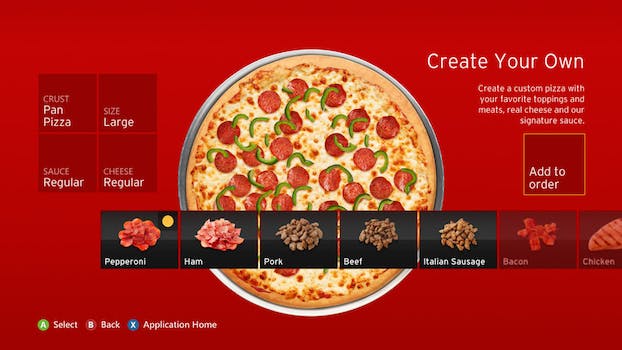 Now you can order pizza from your Xbox

Pizza Hut may not sell dehydrated pizzas yet, but for Xbox Live users, this might be the next best thing.

The fast food franchise is launching an app which lets you order a pizza while you game—all without the hassle of putting down your game controller to pick up the phone or interacting with an actual person while placing your order.

The app, which is set to go live today, links your Xbox Live account with your Pizza Hut account and gives you access to the entire Pizza Hut menu. From there, you can choose any of the featured items as well as create your own masterpiece with your game controller, the sound of your voice, or Kinect gestures, although it’ll probably negate your Dance Central 3 workout.

You can already order pizza through Pizza Hut’s website and an iPad app, but this would be another way for people to quell their pizza craving if they don’t have a computer or it’s in another room, according to Xbox’s Larry “Major Nelson” Hryb.

“If you look at our audience, they love pizza. I mean, who doesn’t?” Hryb told Polygon. “It has international appeal, and Pizza Hut is a recognized brand that matches up well with the Xbox brand.”

In order to entice more people for the app, Pizza Hut is giving Xbox users a 15 percent discount off their first purchase as long as they download the app and order before May 6. College students procrastinating on finals, take note.

But until robots can hand us a meal pill a la The Jetsons, you’ll have to put your controller down to actually eat your pizza.