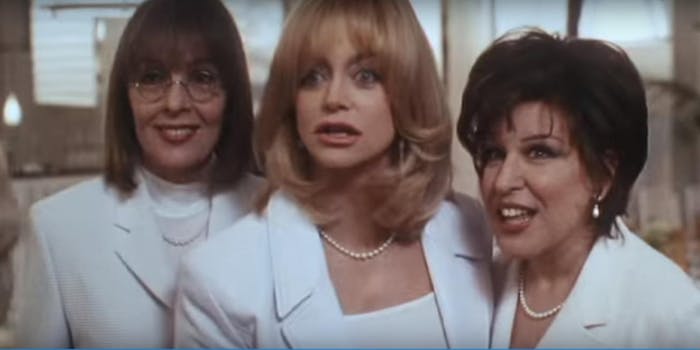 After 20 years, the 'first wives' are back together again.

Netflix has acquired a new feature film to add to its burgeoning library of originals. The streaming video-on-demand service is working on the comedy flick Divanation, starring favorites Bette Midler, Goldie Hawn, and Diane Keaton.

Written by Lisa Addario and Joey Syracuse, Divanation features Midler, Hawn, and Keaton as three estranged members of a formerly popular singing group who are forced to get together again nearly 30 years after their harsh split. The comedy, originally confirmed by Deadline, will reunite actresses Midler, Hawn, and Keaton, who all starred together in the 1996 romcom The First Wives Club. Mythology Entertainment’s Brad Fischer, James Vanderbilt, and William Sherak will produce Divanation alongside Alan Nevins. Tracey Nyberg is set as an executive producer.

Divanation is a solid example of how Netflix is looking to expand its demographic reach, especially in terms of older generations. For example, the streaming platform recently found great success with its original series Grace and Frankie, starring Jane Fonda and Lily Tomlin. That series, which hasn’t yet debuted its second season, was already renewed for a third thanks to its popularity (ironically driven by a tweet from millennial-aged Miley Cyrus).

Netflix will move forward on production of Divanation as soon as the streaming platform finalizes the script and hires a director. No release date has been announced for the comedy movie as of yet.