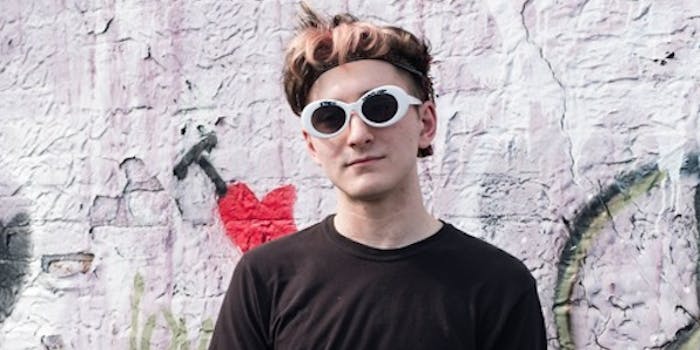 SoundCloud rap song might land teen in jail for a decade

'Everyone in my town thinks I'm crazy.'

Eighteen-year-old Michael Schmitt may be looking at up to 10 years in prison after a SoundCloud song he uploaded in February prompted SWAT teams to descend upon his high school.

Schmitt is a senior at James Caldwell High School in Caldwell, New Jersey, and caused a panic this past winter after a freestyle rap he posted days after the Parkland shooting made students, teachers, and parents worry he was planning a school shooting of his own. The morning of Feb. 24, he recorded a crude song at home in his bedroom with lyrics like “you can suck my dick,” “pull my gun, kill your fuckin’ head / now you’re dead, go to sleep.” His SoundCloud profile pic showed him pointing a handgun at the camera with heart and star emoji swirling around his head. Nobody is named in Schmitt’s rap, but his high school is referenced in the title: “u lil sluts @ jchs i love u all even tho yall hurt me and i forgive u. i would never hurt u.”

Schmitt promoted it on Twitter and Snapchat that morning, and by the afternoon, JCHS went on lockdown.

School Principal Jim Devlin told BuzzFeed News that his decision to get the authorities involved was an easy one to make. “A student associated with our school put a violent song on SoundCloud, which references killing somebody—shooting somebody in the head—and posts a picture of him with a gun, and made a connection to girls at our school,” he said.

Schmitt was ultimately arrested for creating a “false public alarm,” which carries a 5- to 10-year sentence in New Jersey, and taken to jail in Newark. Fourteen weeks later, the 18-year-old is under house arrest and facing a potential trial over a rap song he claims was a parody.

“They painted me as a school shooter, and that’s terrifying,” Schmitt told BuzzFeed News.

The teen insists he’s just weird and loves hip-hop in a predominantly white, conservative town. Schmitt also says that he calls his male friends “sluts,” doesn’t own a gun, and never planned to attack the school.

Despite the somber tone in Caldwell, on social media, the reaction has largely been one of amusement. Some Twitter users are impressed at how quickly the school took action, while SoundCloud users take issue at now being associated with Schmitt’s non-rhyming lyrics.

If anything, he should go to jail for terrible lyrics. It doesn't even rhyme. https://t.co/x57PlnrIIA

Joseph Giordano, the assistant prosecutor handling Schmitt’s case, says he plans to present before a grand jury in the coming weeks. Even if the teen doesn’t end up going to trial, he’ll still have an arrest record for the incident. He was also fired from his job at UPS as a package handler and says some of his family members have distanced themselves.

“Everyone in my town thinks I’m crazy,” Schmitt said.