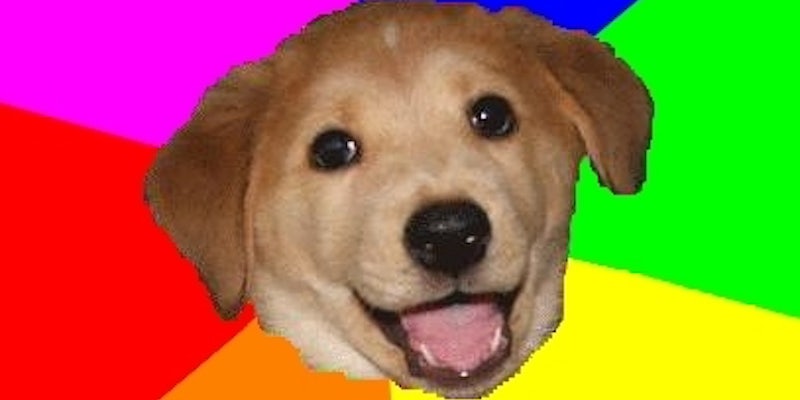 Don’t be a depression dog: Meme Generator is looking fresh

if you thought that Meme Generator was a big megalopolis company, think again.

Advice Dog hasn’t changed a bit. But Meme Generator, the platform you might use to create similar image macros, has a whole new look.

This week, the site revealed a more streamlined design and a slew of new features. A man who asked to be called Eff Snarf, who founded the site two years ago, said it was time for a change.

“The reason we did a makeover is because the website hasn’t changed much since it started,” said Snarf. “We wanted to give users more features to play with, such as voting, following other users and all the usual Web 2.0 shenanigans.”

The 31-year-old former Web developer said he came up with the idea for Meme Generator while browsing 4chan. He saw users posting what would later be known as Depression Dog, text on top of the same image of a sad looking puppy.

“I thought, there should be an easy way to caption these images,” he said.

Snarf quickly put together a small website where users could center text on blank versions of macro images to produce new instances of the memes. Forum users quickly caught on.

Today, Meme Generator is so successful that he has since left his development job to focus on it. Not everyone is pleased with Snarf’s success, and he’s seen his fair share of drama. The largest complaint is that Snarf is using the word “meme” incorrectly.

“This s important for me to communicate: I’m well aware that ‘meme’ doesn’t mean a captioned image,” he said. “But that’s the name I originally chose for the website and it’s really impossible to change it right now.”

Others complain that some of the image macros are being used to bully people. Snarf regularly takes down images at the victim’s request.

“The website is indeed being used for bullying a lot but we try our best to minimize that,” he said.

And then there’s 4chan.

“People think that Meme Generator is backed by some huge corporation exploiting 4chan’s content and they have no idea it’s a single person garage thing,” said Snarf.

4chan has fought back by blocking Meme Generator images as spam and making MemeGenerator.com redirect to 4chan’s home page (Snarf only has MemeGenerator.net). Snarf said he believes that 4chan’s founder, m00t, ripped him off with Can.vas.

“I emailed m00t a couple of times about how imageboard software can be improved, for example by integrating image captioning into it,” he said. “I didn’t get a reply but after a couple of months I read about him raising funding for canv.as, which I’m pretty sure was inspired by my emails.

Snarf has recently hired another developer to help him out, but described the past two years of site maintenance as “guerrilla warfare.” Now, he will be able to focus on adding new features and new types of memes as well as just defense.

Though users will experience some new features, some things will never change.

“I believe nothing can top the Advice Dog format,” said Snarf.