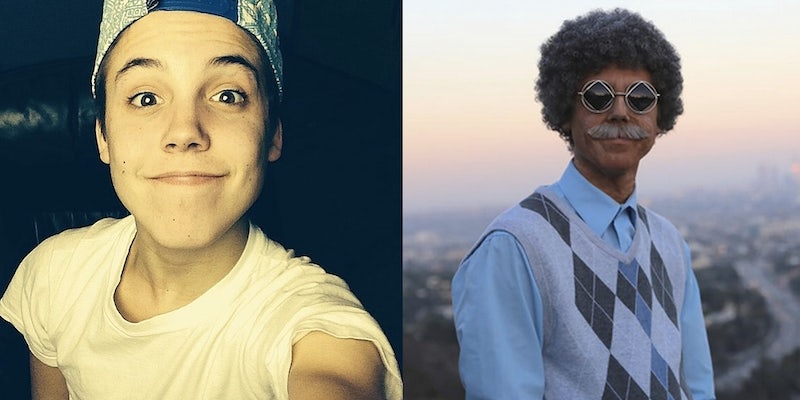 He's facing criticism for his actions, but insists he's a 'good person.'

Matthew Espinosa, a Vine personality with 5.7 million subscribers, showed up at VidCon this weekend dressed in what many are calling blackface, and caused a chase on the convention floor before coming under fire for his actions online.

Espinosa tweeted to his 3.1 million Twitter followers that his “uncle” would be attending VidCon, and linked to a new profile for someone named “Papa Squat.”

yo why'd my uncle just texted me and said "yo u hittin vidcon? I'll see u there tomorrow!"
…………bruh

On Friday afternoon, Papa Squat made an appearance at the convention, flanked by large bodyguards and followed by film-style cameras. He was outfitted in an afro wig, face paint that made Espinosa’s complexion appear darker, a sweater vest, and a gold chain. Fans mobbed him as he walked the convention floor, with several attendees running after the crowd even though they told the Daily Dot they had no idea who they were following.

Espinosa began posting Papa Squat images a week ago on Instagram, where the character already has more than 4,000 followers, and his fanbase debated whether or not the portrayal could be construed as blackface. Fans also called him out on Twitter for the costume.

Espinosa did tweet at fans about the blackface accusations, but has since deleted the tweet. He claimed his uncle was “from Ohio.”

He did leave up tweets where he said he knows he’s “a good person” and wants to make a difference in the world.

I know I'm a good person and that I have the morals of someone who wants to help make a difference. I know what I want in this world!

Espinosa is not the only Vine star to cause uproar at the festival. Carter Reynolds, whose sex tape leaked last month, was banned from VidCon and the hotels surrounding it this weekend. Teens who met the star took pointed photos with him, threw up middle fingers, and shouted, “Fuck you, Carter,” while he snapped photos with other fans. Hank Green, VidCon’s founder, said he was not invited and had him removed.

Espinosa is now planning his fall tour, presented by DigiTour, called the Creative Collab Tour, which kicks off Sept. 29 in Florida.