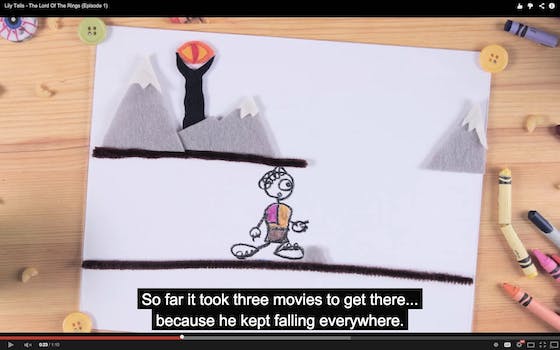 Lily Tells is an award-winning animated series that loses nothing in translation.

Lily Tells proves that if if the story is right, language rarely gets in the way of making a connection with the audience.

With its origins as a YouTube series narrated in French-Canadian, this webseries in which a 6-year old explains the plots of some famous movies loses little in its translation to English. Wins at the L.A. Comedy Festival and the ATL Web Fest attest to the universal, heartwarming appeal of seeing a complicated film through the eyes of a young viewer.

“I think the most important thing is that she talks about movies everybody knows,” cocreator Vincent Ethier told the Daily Dot. “I guess people are attracted to the common references of popular culture. It is the first thing that makes them click on the link to watch the series. Then they are surprised by the gap between what us adults understand of serious and mature subjects and what a 6-year-old thinks she is seeing.”

The idea for the series came from Ethier’s 2011 short animated film in which a 6-year-old girl told her version of the story of a famous French-Canadian movie. It was screened in a small film fest in Montreal where his childhood friend Bruno Mercure saw it and was touched by the idea of a young girl summarizing the plot of movies she should not have seen. The pair worked together on developing the concept as a webseries and founded animation studio Dans Ta Pipe, which Ethier says is a French expression that means “in your face.”

The Independent Production Fund, a Canada-based nonprofit, financed Camille Raconte, the French version of the series. Ethier acted as director/writer/animator, while Mercure handled production. The original version launched in July on You Tube, and due to its success in Quebec, five of the 12 episodes were translated into English.

Ethier is quick to point to the selection and framing of Lily is a key to the series’ success. “The movies that we chose are not kid flicks. They are dramas or horror films,” Lily Talks’ director said. “So the naive look of Lily forces the viewers to put in perspective those serious matters. She makes them rediscover classics. Also, Lily is not any other 6-year-old kid. We created a more complete character so people could connect with her and not only with a text, a joke, or an old classic movie. She has a name, and a personality, and she gives us hints of her life and her family relations through the episodes so the viewers get to know her even if we never see her face.”

The process from script to screen took one year, with episodes taking one week to write, edit, and animate, plus two more days for voiceover. Next up, of course, is more of the same.

“We are now trying to push the English version. It is quite hard since we don’t have the basic English speaking fanbase here in Montreal to launch the the series,” Ethier added. “If we could reach a respectable amount of views on our YouTube channel, we would be able to translate the last four episodes we have produced for the first season.” As for the next set of Lily Tells webisodes?

“The canvas would be exactly the same as for the first season with 24 new classic movies,” Ethier said. “We would like to know a bit more about Lily through the episodes and develop her character.”