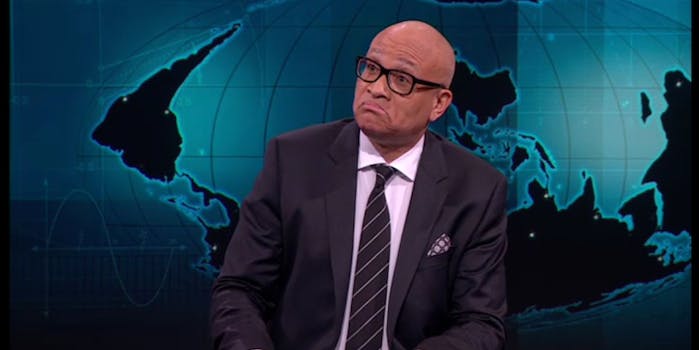 Larry Wilmore took The Nightly Show to Baltimore on Thursday for a sit-down chat over some pie with former rival gang members, who entered a truce—or is it a treaty?—earlier this week to help bring their communities together.

The discussion brings a sense of levity to the events of the past week, when news organizations, skeptical white people, and fans of The Wire failed to do what Wilmore so easily demonstrates: Listen (and get in a few good zingers).

One of the men told Wilmore, “I was walkin’, and we were all in a pack… and one of the Blood homies, they stepped on my shoe. And I looked at him, and I was like, ‘Yo. You know three days ago I’d have hit you in your mouth for that?” Wilmore shot back, “And three days from now, things may be back to normal. You can hit him in his mouth again.” The group of men assured Wilmore that they are good, though they can’t speak for the rest of America’s gangs.

The conversation explored the complexities of living in Baltimore and the conditions that lead to gang violence, to which Wilmore related by explaining the intricacies of property taxes on his million-dollar house.

Jokes aside, they urged Americans to never give up once Friday’s “police verdict” comes in, because “that’s not the last investigation.”

Since this aired, Freddie Gray’s death was ruled a homicide, and six officers were charged.

Even if the gang doesn’t have a corporate credit card, I’m sure it can expense the diner. After all, this was more or less a business meeting.

Screengrab via The Nightly Show/Comedy Central