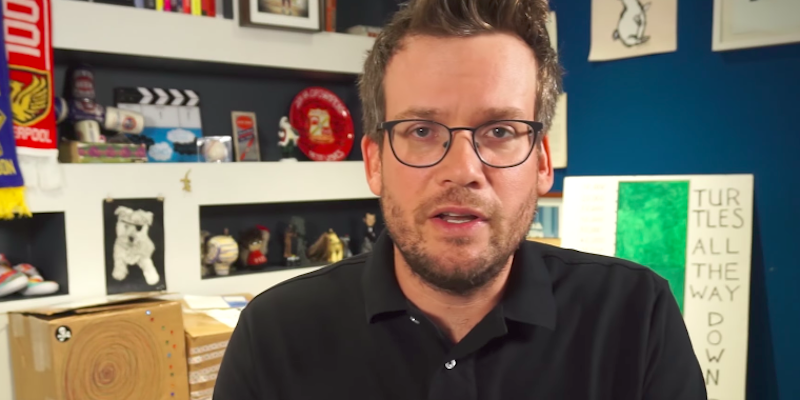 John Green opens up about his struggles with OCD

The author discussed how his own struggles with OCD inspired his new book, 'Turtles All the Way Down.'

John Green opened up about his mental health struggles and how they inspired his new book in a YouTube video on Tuesday.

The author discussed his personal experience with obsessive-compulsive disorder in the video, titled “What OCD Is Like (for Me),” uploaded on the Vlogbrothers channel that Green runs with his brother, Hank.

Green first urged viewers to listen to experts when it comes to mental health and other sensitive issues. He then dispelled the notion that OCD consists merely of “excessive hand washing or neatness,” as it’s “mostly seen in the popular imagination.” On the contrary, he said, “I experience these obsessive thought spirals in which intrusive thoughts—that is, thoughts that I don’t want to have that seem to come from outside of me—sort of hijack my consciousness.”

The writer acknowledged that most people have experienced unwanted thoughts at some point, perhaps after the loss of a loved one—but he deals with them constantly, sometimes “for days or weeks or months.”

“I might worry out of nowhere that my food is contaminated or somehow poisoned, and then suddenly that will be the only thought I’m able to think,” he said. “When that gets bad, I can lose all control over my thoughts for an extended period of time, to the extent that I can’t follow what’s happening in a TV show or read a book.”

Green added that he uses “compulsive behaviors” to deal with these obsessive thoughts, such as constantly checking his food for contamination or Googling the consequences of eating moldy bread. He called these behaviors “ways of trying to comfort and calm myself. I’m not checking over and over again to be eccentric or whatever. I’m doing it because I cannot stop obsessing over the fear that I might have eaten living mold, and I will do whatever I can not to be strangled by that thought.”

The Looking for Alaska and The Fault in Our Stars writer acknowledged that mental illness often gets stigmatized or romanticized in our culture, both of which can prove equally damaging and distract from the actual problem.

“I don’t feel like my mental illness has any superpower side effects,” he said. “In fact, when I’m stuck inside a thought spiral, I find it very difficult to observe anything outside of myself.”

Green said he drew on his own experiences with OCD for his new book, Turtles All the Way Down. The book follows 16-year-old protagonist Azal Holmes, who grapples with OCD as she strives to be a good friend, daughter, and detective. Green stressed that the book is fictional, but his own mental illness informed Azal’s experiences.

“When I started the book that has become Turtles All the Way Down, I wanted to try to find form and expression for this way-down, non-sensorial experience of living inside of thought spirals,” he said.

The author concluded the video by urging any viewers who struggle with mental illness to seek professional help, as such illness can usually be overcome.

“I know it can be difficult to get effective treatment,” he told his audience. “But there is hope, even if your brain tells you there isn’t.”

Turtles All the Way Down will be released on Oct. 10.