John Cusack promotes Freedom of the Press on Reddit

The actor took to the social news site Reddit to discuss free speech, politics, and driving around with Johnny Depp, Hunter S. Thompson, and a blow-up doll.

John Cusack is a remarkable fellow—and not just because he’s starred in a number of beloved films over the last three decades. He has a another claim to fame: the Freedom of the Press Foundation, a pro-transparency nonprofit he’s out to promote.

Wednesday afternoon he took to social news site Reddit to give an AMA discussing free speech, politics, his movies (begrudgingly, it seemed), and driving around with Johnny Depp, Hunter S. Thompson, and a blow-up doll. Here are some highlights from the live-interview session.

What are your all-time top five favorite records? (nathaner)

not a top five guy weirdly..too many to choose

You have been pretty critical of Obama. What current politicians do you admire? (ben3putt)

What is your opinion of Bradley Manning’s whistle-blowing incident to Wikileaks? (deansgirl)

Basically, we should be supporting any and all organziations that bring transparency to government. Check out our website and some of these amazing organizations we’re supporting: https://pressfreedomfoundation.org

How much fun is it working with your sister in roughly the 10 films you’ve appeared together in? (ryte4flyte)

So much fun and so easy — as a producer I know whenever she’s on screen it’s a home run. Also my other sister Annie as well. My brother Bill was the crazed backwater solider gobbling freeze dried coffee in War Inc. He also did a lot of the art designs and set decorations for the film. I’m lucky to have talented family members I can exploit for cheap labor!

You got to spend some time with a personal hero of mine, Hunter S Thompson. Can you tell me any crazy stories from the time you spent with him or anything he said to you that really stuck with you? (dtnoire)

I can only imagine what he would say about the expanded drone wars, or what he would make of the knowledge that Obama has overseen a fundamental extension of a vast array of Bush/Cheney executive privilege claims – or in many cases outdone them in ways that gut international law and our constitutional rights. I wonder how he would write about unchecked greed of wall street – and the bought and paid for government response – when the moral obligations of government declined and fiduciary responsibilities of elected officials were totally overtaken by rampant greed…

Hunter was also the funniest human being i have ever met—loyal and wicked in the best way…a deeply, almost romantic idealist at his core… Always the smartest guy in the room with the greatest bullshit detector I’ve ever seen

Please tell the story behind this. (cjh8686) 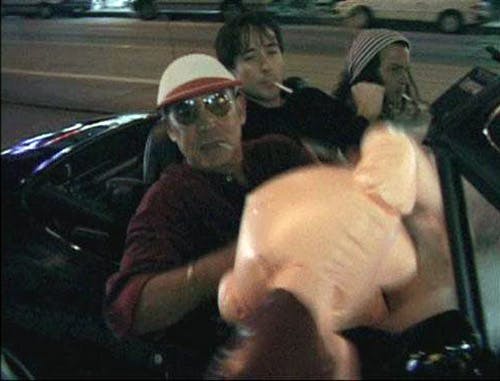 Are you going to enter politics? (umen72)

We are both in it now. With Freedom of the Press Foundation, we’re on the front lines of politics, bringing transparency to government. https://pressfreedomfoundation.org

Danny does what he wants – improv! I’m a smart enough writer to get out of the way of a comic genius

Do you enjoy the liberties of being an actor both in life and on stage (for example, having the name credit to support charities)? (Paulten)

it feels better to use whatever recognition i get in causes i believe in and to speak out what i believe…it always feels good to be of service in some small way.. on some level i just do it to sleep better at night.. but i’m also an eternal optimist in some ways- i really believe things can turn for the better when people become less passive and engage..