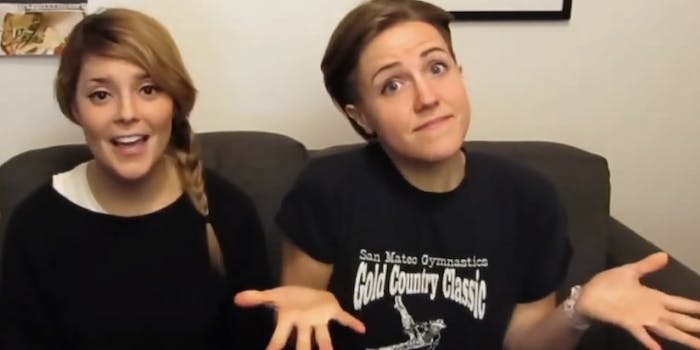 Two of YouTube’s brightest stars will take center stage at September’s Streamy Awards when Grace Helbig and Hannah Hart join forces as hosts of the 2014 event.

“Grace and Hannah are two talents that truly embody the hard work and success of today’s digital age,” said executive producer Assaf Blecher in a statement. “There is no better team to co-host the show, and we couldn’t be more excited to watch their comedic talents collide.”

Helbig and Hart have collaborated multiple times in the past, in various YouTube videos and in live settlings as part of their #NoFilter performance group with fellow YouTuber Mamrie Hart (no relation to Hannah). Helbig and Hart’s individual successes are also noteworthy, and together they command an audience of more than 3 million subscribers. Hart recently released a cookbook under the My Drunk Kitchen moniker, and Helbig is tapped to host her own E! talk show. The pair will preside over the awarding of 14 honors live, with additional categories awarded prior to the show.

“The Streamys will be filled with memorable moments, show-stopping performances, and plenty of surprises,” Helbig and Hart jointly stated (in unison, presumably) in a press release. “We’re overjoyed about hosting this year’s show together and spotlighting our talented peers who are ushering digital entertainment into the mainstream.”

The Streamys will honor the best and the brightest of digital video live from Los Angeles Sept. 7. The last Streamy Awards were hosted by Chris Hardwick of Nerdist fame, who is currently dominating Comedy Central late night programming with his @Midnight game show.

The Streamys also announced today the audience choice finalists for Entertainer and Show of the Year.  Voting is now open on the Streamys website where fans can vote once per day.

Entertainer of the Year:

Show of the Year: