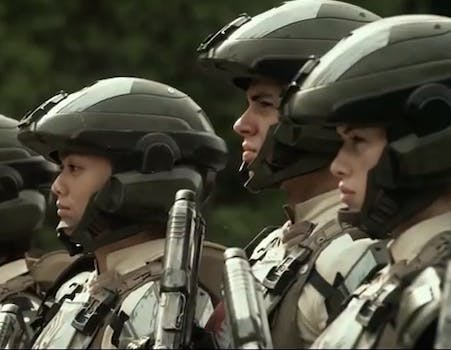 Microsoft's full-length, $10 million Halo flick may prove that direct-to-Internet is the new direct-to-DVD.

Sorry, silver screen. You’re not getting the Halo movie.

Choosing to forego a theatrical release, Microsoft launched the first installment of Halo 4: Forward Unto Dawn today on YouTube.

The live-action film was directed by Stewart Hendler (Sorority Row) and cost close to $10 million to produce. According to IMDB, Halo 4: Forward Unto Dawn is set in the future—2525 to be exact— and focuses on a young cadet becoming inspired by John-117, a.k.a. “Master Chief,”  the super-soldier at the center of the Halo video game franchise.

The entire movie will be hosted on MachinimaPrime, one of eleven YouTube channels gaming website Machinima.com owns and operates. The five-part series will culminate with the Nov. 6 release of Halo 4, the newest entry in the very popular game series. Halo 4: Forward Unto Dawn will then be released on Blu-ray Dec. 4.

At least one analyst is hinting that Microsoft’s decision to skip the theater is groundbreaking.

“With this experiment, they’ve now given us another window into, ‘What does the premium online content market look like?’”

It’s important to note that Microsoft isn’t the first to release content online and then package it for home video consumption. Two perfect examples that precede Halo 4: Forward Unto Dawn are Mortal Kombat: Legacy and Joss Whedon’s Dr. Horrible’s Sing-Along Blog, which were hosted on the Machinima YouTube channel and Hulu, respectively. Both web series would later be offered on Blu-ray and DVD.

Given that the first three Halo video games have earned over $3 billion, it’s hard not to see the movie as a $10 million feature-length commercial.

Matt McCloskey— a Microsoft business director who oversees the Halo property— would disagree with the previous assertion. McCloskey told Bloomberg News that Halo 4: Forward Unto Dawn “is in and of itself a standalone property.”

For those interested, you can watch the first installment below: