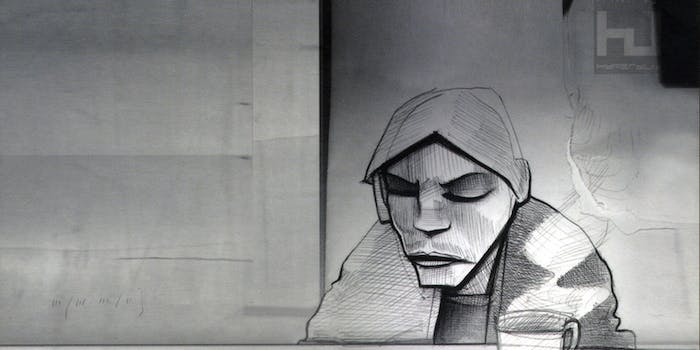 There seems to be some ongoing confusion in the world of electronica. Internet, you're not helping.

Commitment to anonymity can prove a difficult trick to pull off, even online. A cult of mystery around a certain individual spurs ever more serious efforts to uncover a true identity. Just ask Banksy, if you happen to run into him sometime.

It’s not surprising, then, that fans of moody electronica and cerebral dubstep wanted to know who ghostly London producer Burial really was. They got an answer in late 2011: His name is William Bevan, and he’s a graduate of the Elliot School.

But some fans weren’t satisfied with this revelation, thinking it another layer of deception. A Tumblr sprung up to claim that William Bevan was merely a pseudonym of another electronica artist, Four Tet, aka Kieran Hebden—who also happened to attend the Elliot School.

The blog, which has not been updated since December 2012, offers this line of reasoning:

Burial has “revealed” his identity as a man named William Emmanuel Bevan.

The sixth Google result when one searches “William Bevan” is an independently family-owned funeral service.  According to their website, William Bevan Funeral Directors serves the Herefordshire and Gloucestershire areas.  The funeral service is specifically based out of Ross-on-Wye, a small market town in southwestern England.  The town is two and a half hours W-NW of London.

Funeral homes assist with the cremation or burial of the deceased.

Further confusing the issue are the somewhat frequent collaborations between Four Tet and Burial over the years. In early 2012, Four Tet tweeted a SoundCloud link for a new track the two had worked on together, “Nova.”

Previously, the pair released a split single, “Moth”/”Wolf Cub.” The obvious musical chemistry between Bevan and Hebden only reinforces this persistent conspiracy theory, which is just as likely a joke on the musicians’ part, one designed to keep people guessing.

Indeed, another round of kidding last month from Canadian producer Dan Snaith, who composes as Caribou, and before that as Manitoba, set music communities ablaze once more with hapless speculation. He later admitted to trolling, though a piece today in Equalizer Magazine, a website satirizing Internet music coverage, pretends to confirm his original tweet, adding to the anarchy with a phony screenshot of Four Tet admitting the “truth” on Facebook.

how has it taken me this long to figure out that @FourTet is Burial?

Hi everyone. Sorry about yesterday – I couldn’t resist. pic.twitter.com/wTNFu8hGei

The question of intent is murky here, with so much misinformation constantly injected into the mix, but if Bevan or Hebden have any hand in sowing these rumors, it could be read as a deeply intelligent comment on music’s digital-age hype cycle: Who really cares who’s putting out what, as long as the killer beats don’t stop?