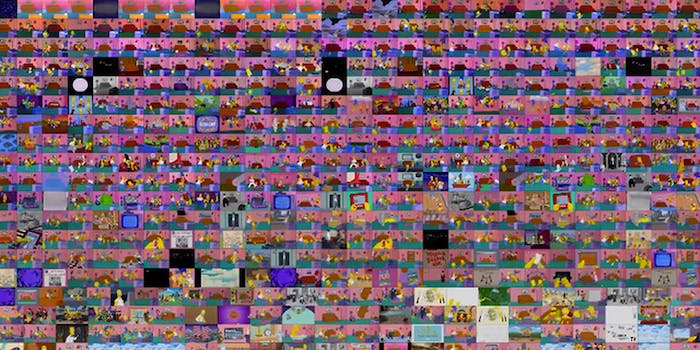 Go ahead and see how long you can stand it.

The Simpsons’ couch gag has become a pop culture motif, and each intro contains its own universe. Don Hertzfeldt’s recent gonzo intro highlighted just how high-concept they can be. So what would 25 years of Simpsons couch gags played simultaneously sound like?

The folks at Omni Verse have apparently thought about this, and assembled all 554 intros together. But they weren’t satisfied to just make a montage. They wanted sensory overload. Go ahead and see how long you can stand it. My left eye started twitching after a minute.

This isn’t the first time Omni Verse’s attempted this with TV shows: Previous efforts include Twilight Zone, Star Trek, and Buffy the Vampire Slayer, among others. Proceed with caution; it’s like a nightmarish Magic Eye fever dream in there.