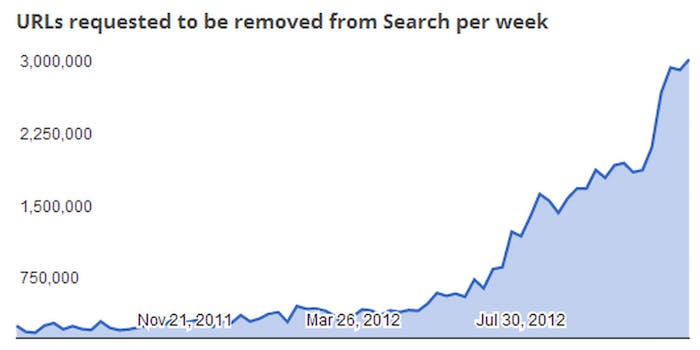 Google’s copyright removal requests up 1000 percent since May

Since it started keeping track of copyright removal notices in its official Transparency Reports, Google has seen takedown requests from copyright owners skyrocket.

Google has announced a startling leap in the number of copyright takedown requests it is receiving per week.

In a post on the company’s Policy By the Numbers blog, Fred Von Lohmann, Google’s legal director, wrote that the number of removal requests “has increased tenfold in just six months to more than 2.5 million requests per week today.”

Six months ago, when Google added the copyright takedown requests feature to its Transparency Reports, they were receiving around 250,000 per week.

“We are also providing information about how often we remove search results that link to allegedly infringing material,” wrote Von Lohmann. “Specifically, we are disclosing how many URLs we removed for each request and specified website, the overall removal rate for each request and the specific URLs we did not act on.”

Google’s removal rate is 97.5%, meaning the vast majority of the requests are acted upon in favor of the party making the request. Beginning with the announcement Tuesday, anyone can now also download Google’s takedown data, exporting it in CVS files.

Why such an extraordinary increase? A Google spokesperson told Jennifer Martinez of D.C.-based publication The Hill’s Hillicon Valley blog that “they believe some of the increase is from Google streamlining the process to submit requests, and also due in part to copyright owners using more sophisticated tools to identify piracy and send notices to Google.”

Although Kate Bedingfield, spokesperson for the Motion Picture Association of America, told The Hill that “the data also revealed how difficult it is for content creators to protect their work from online piracy,” the entertainment industry seems to be doing OK if the numbers are any indication.

In the past month, the number one requester of takedown is “RIAA member companies (EMI Music North America, Sony Music Entertainment, Universal Music Group, Warner Music Group and their associated record labels),” requesting over 2.4 million URLs from 82 domains. In second place is BPI Ltd., a.k.a. the British Recorded Music Industry, with about 1.35 million URLS from 145 domains. The top 10 include Microsoft, Fox, Warner and NBC Universal.

As much as this may help entertainment industry interests, it may also provide policy-makers with better data to formulate coherent and balanced policy.

“As policymakers evaluate how effective copyright laws are,” said Von Lohmann, “they need to consider the collateral impact copyright regulation has on the flow of information online.”