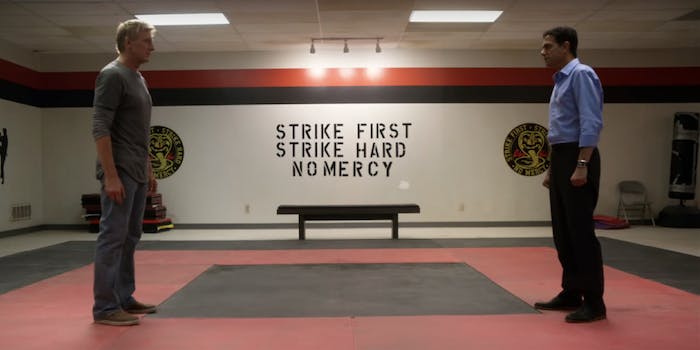 ‘Karate Kid’ gets a modern makeover with ‘Cobra Kai’

Daniel LaRusso and Johnny Lawrence are older now, but they still have unfinished business.

The stars of ’80s classic Karate Kid make an appearance in YouTube Red’s first teaser for Cobra Kai, a 10-episode series that focuses on Daniel (Ralph Macchio) and Johnny (William Zabka) as adults and fathers who still have a simmering rivalry. The Cobra Kai dojo has been reopened and gotten a makeover, and as Daniel says in a confrontational scene with Johnny, “We aren’t done.” (It’s not clear if he’s talking about the remodel or their rivalry.)

The series was announced last summer, and is supposed to be set in present-day California, with a focus on a new generation of karate kids, including Daniel and Johnny’s. A release date is not set yet, but the series is expected to be released in 2018.