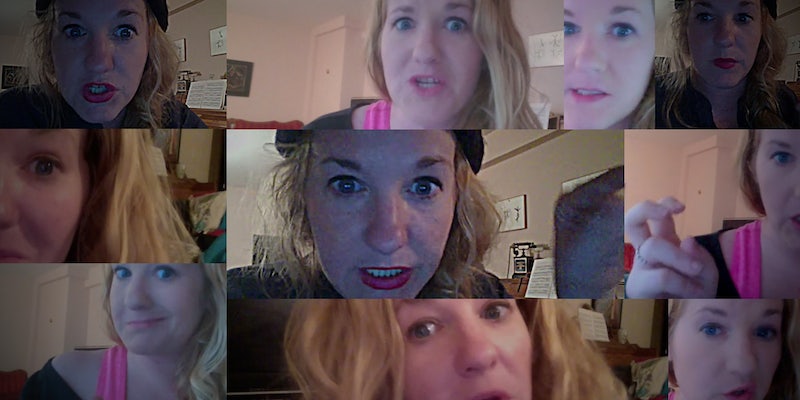 A comedian turns to YouTube to document the 'I'm not really famous yet' stage.

There are movies and TV shows that have explored a comedian’s struggle with life after fame or at a certain age, but Brooke Arnold is letting us in on a different level.

After the NYC-based performer started writing a memoir about her childhood a few years ago, she entertained the idea of doing standup. She debuted Brooke: The Webseries in October 2015 as a means of documenting her path as a comic—and the highs and lows along the way.

In episode 1, she admits “I’m not really famous yet,” and so like many before her, YouTube is the medium to document her (hopeful) ascent into more mainstream fame. Episode 2 explores the eternal hustle comics endure to find stage time, refine material, and get known.

Arnold, who’s been doing standup for two years now, didn’t grow up wanting to be a comic. She grew up in a fundamentalist Christian church— which she explored in some detail for Salon last year—and the Advanced Training Institute, the same controversial homeschooling program the Duggars were part of. In the piece, she unpacks the damaging ideology the program and its teachings instilled. When she left the church around age 18:

I found myself suddenly thrust into a world that I was totally unprepared to navigate. Like Kimmy Schmidt fleeing from her bunker into the sunlight, I suddenly found myself surrounded by people and events that I had never been prepared for. It was nothing like the comically magical larger world that Kimmy Schmidt finds herself in. There were no handsome rich men, no forgiving landlords, no fabulous roommates, and certainly no sacks of cash. I entered a world full of things that I did not understand and a world full of people whose ill intentions I could not interpret or comprehend.

“I could be a cashier at Walmart and I’m still a rebel.”

Arnold says she did watch “old school Saturday Night Live” episodes when she was a teenager, but she didn’t have access to much pop culture or grow up idolizing comedians. “I was taught to believe that my only options as a woman were to get married and have children,” she said. “Even me having a job at an office was like this huge departure. That was success, you know? I could be a cashier at Walmart and I’m still a rebel. But the idea that I could ever do anything more, something creative or artistic, something in the public eye… That just never crossed my mind.”

But people started encouraging her to tell her stories, which gave Arnold the confidence to get on stage. The webseries also pulls back the curtain on how audiences often treat women comics. In episode 3, Arnold takes us “backstage” (i.e., the women’s bathroom) at a comedy club in Long Island, as she and fellow comic Kristy Belich wait to go up. They debate the slog: performing at less-than-ideal venues, getting enough stage time, or, as Arnold notes, hating yourself if you bomb.

“Or you just keep getting on [stage] to get it better,” Belich says. “It’s like, you don’t hate yourself. You just go, ‘Oh, shit, that means I have to do two times more stages or three times more stages.’ And then once you get it good, then you get on stage and a guy is like, ‘Hey, fat girl.’”

Arnold says she thought documenting a comic’s grind could be “compelling, potentially,” and maybe even help other comics on a similar grind. It’s also a way to build a fanbase, and connect more personally with it. She’s documenting a road, but it’s not clear how long it will be.

“I feel like there’s a tricky balancing act that you have to do,” she said. “When I first started, I set the bar really low for myself; the first month it was literally just, ‘Get on stage.’ Then it was like, ‘Stay on stage.’”