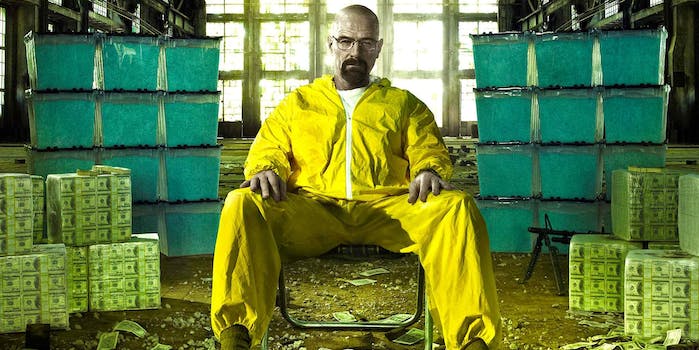 How Reddit changed the way I watch ‘Breaking Bad’

The level and sophistication of show discussion in Reddit surpasses the analysis of even the most seasoned pop culture writers.

In last Sunday’s episode of Breaking Bad, the penultimate of the series, Walter White, beleaguered and on the run, makes one last attempt to intimidate and manipulate his lawyer and sometimes-accomplice Saul Goodman. Goodman has just informed White, for the second time in the series, that he’s done and will no longer carry out the meth king’s bidding.

“You remember what I told you?” White asks, bringing his face a few inches away from Goodman’s. “It’s not over until I say it’s over.” Or at least that’s what he attempts to say before a violent coughing fit leaves him bent over and heaving.

The symbolism of the encounter is readily apparent: White is now estranged from his family, a target for law enforcement, and dying from lung cancer. He’s powerless. “It’s over,” Goodman says quietly and then leaves.

The scene references a previous one in the same season in which a much more powerful White delivers that line to a frightened Goodman. But I didn’t know, at least not at the time, that it hearkens back to a second scene much earlier in the series. I discovered this the next day when I wandered over to r/breakingbad, the Reddit subreddit for the show. As pointed out in a post by user LeeRobbie:

In the first episode where Saul and Walt meet, Jesse and Walt kidnap Saul and take him to the desert where they have already dug a grave. Walt trying to be Heisenberg begins to threaten Saul but has to stop due to his cancer cough. This is how their relationship began. In the most recent episode, their relationship ends with Walt trying to be Heisenberg [and] threatening Saul only to be unable to because of his cancer cough.
Props to Vince for bringing this relationship full circle.

The post, by making a connection that had sailed past my head while watching the show, perfectly captures why I and thousands of others visit r/breakingbad every week. The level and sophistication of show discussion, aided by Reddit’s efficient voting system, surpasses the analysis of even the most seasoned pop culture writers for mainstream news outlets.

With over 200,000 subscribers, the subreddit has grown into a powerhouse of Breaking Bad fandom. Its weekly episode discussion threads spawn thousands of comments. Its users create and upload gorgeous and absolutely stunning fanart. And several members of the show, both from the cast and crew, have stopped by to participate in AMAs (short for “Ask Me Anything,” it’s a way for Reddit users to interview a subject en masse). Both Bryan Cranston and Aaron Paul have appeared for AMAs and so have more minor characters and members of the production crew. Daniel and Luis Moncada, the two actors who play the violently vindictive twins in the third season, have become diehard redditors since they conducted their AMAs.

But r/breakingbad wasn’t always this popular. In fact, for most of the first two seasons and part of the third, it boasted fewer than 300 subscribers. Unlike many Breaking Bad fans, many of whom came late to the show via Netflix, r/breakingbad mod sanchokeep33 watched the pilot episode the night of its premiere.

“I was astounded,” he told me on the phone. “I immediately went looking for a subreddit for it. I think I found it a couple days after it had been created with no posts on it at that point. It had maybe under 10 users.”

For those first few seasons, he said, the discussion volume was minimal, with little resemblance to the current calibre.

“After Season 3 is when everything seemed to explode,” Jarod Coonce, another mod for the subreddit, told me. “That season was my favorite season, and that’s when the show really took off. The discussion threads were awesome, and there were almost a thousand-plus comments on them. It was pretty cool to see it happen firsthand.”

There are nearly a dozen mods on r/breakingbad, and several of them split up various duties to keep the subreddit humming along. Coonce monitors the live episode discussion threads, which sit at the top of the page while the show is on. Hitting refresh every few seconds will give you a cascading stream of analysis and often raw emotions to what’s happening (similar to what you’ll find if you search the #breakingbad hashtag on Twitter). He explained that the deep level of discussion on the forum provides a kind of ancillary add-on to the show, a way of prolonging the entertainment as viewers are forced to wait week to week for new episodes.

“It’s like you can watch the show, and then listen to the podcast, and then go to the subreddit and get even more insight for things people have noticed,” Coonce said. “It’s part of the experience—all these fans of the show who point out certain things that maybe I missed. It’s just like DVD commentary and extras.”

None of the mods I spoke to knew exactly when AMC and the creators of Breaking Bad became aware of the subreddit, but eventually they began flocking to it in ever greater numbers to conduct AMAs. The first to offer himself up was Giancarlo Esposito, the actor who plays Gus Fring; not only did he answer redditor questions but he uploaded a thank you video as well. Coonce had helped organize a lobbying campaign for Esposito on Twitter, but many of the others seemed to come organically. Esposito was soon followed by Matt Jones (Badger), Bob Odenkirk (Saul), and Charles Baker (Skinny Pete).

“Every single one of them has been so eager and enthusiastic,” said sanchokeep33. “Everyone over there knows what an incredible once-in-a-lifetime show this is for their careers. It really comes through in the interviews they’ve given.”

When it comes to the day-to-day moderation of the subreddit, no one is more busy than ManWithoutModem. Much of his work revolves around ensuring that fresh, good content always surfaces to the top as well as “keeping things such as the sidebar picture updated and the subreddit stylesheet looking great.”

I asked ManWithoutModem why he thinks Reddit has been so successful at amassing such a large group of Breaking Bad fans as well as becoming the home of some of the best show commentary on the Web.

“It differs from any other type of Breaking Bad coverage because of the way Reddit works,” he replied. “With the upvote/downvote system, users can vote threads to the front page where it gets seen by hundreds of  thousands of people—or they can downvote it if it is a not-so-great post and it will be buried.”

The same goes for the comments, with the best quickly bubbling to the top of threads so that visitors don’t have to waste time scrolling through thousands of comments to find the most interesting observations.

The most fascinating part, for me, is the length the community goes to protect users from spoilers. Because so many people have come late to the series via Netflix, you’ll see posts from those who are making their way through the show writing interesting observations as they go along. According to Coonce, whenever one of these posts appear you’ll see “a lot of really concerned posters who write things like ‘You’re going to run into trouble if you stick around here.’ But everybody pretty much regresses to that point of the show and hashes it out with them.” In other words, commenters who have seen the entire series will only discuss the show within the context of what the poster has seen thus far.

With the series finale quickly approaching, the mods are expecting the largest live audience in the subreddit’s history. During the recent “Ozymandias” episode, considered the best of the series, there were 28,000 users on r/breakingbad simultaneously.

But what will happen once the show ends? If the Lost and Arrested Development subreddits are any indication, the critical discussion is only just beginning. As with any great piece of art, critics and fans will dissect it for years to come. Breaking Bad creator Vince Gilligan famously claimed he doesn’t read online discussion of the show while a season is airing. After Sunday, he’ll have a lot of catching up to do.