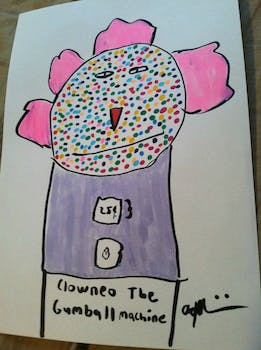 TV hero Andy Milonakis is back but this time as a marker-wielding artist.

If life imitates art, than comedian Andy Milonakis’ life must be full of weed smoking robots, snakes, and meowy, the mulatto kitty cat.

These characters are from “I’m not very good,” a series of 13 original illustrations made by Milonakis himself. The series took five months to plan and 40 seconds to draw, Milonakis said in an email interview with the Daily Dot.

The marker-drawn pieces are very much like Milonakis’ former sketch comedy program “The Andy Milonakis Show.” They are simple, random, and subtly hilarious. And like the show, his art has become an underground hit.

Take “Clowneo The Gumball Machine,” for example. The artwork features a pink haired clown with a face full of colorful dots, a blue torso, and two square slots. It sold for $315.

And the rest of the pieces have also been sold, netting him about $2,190 from the entire series

“I had a feeling that some of them would sell but not that quickly,” Milonakis said. “It was really crazy when this guy on Twitter got a tattoo of one of my characters ‘OINKY THE PIG GHOST’ on his bicep.”

Kocher has been of fan of Milonakis before his show and stumbled upon his artwork two weeks ago thanks to his Twitter account. The first piece that caught his attention was “Oinky the Pig Ghost,” which is, literally, a ghost that looks like a pig. But by the time Kocher tried to buy the piece, it was already sold. So instead he decided to get the illustration tattooed on his left arm, he said.

“What’s the big deal? I have a bunch of tattoos already,” Kocher said in an interview with the Daily Dot. “I see the movement he’s going with, the whole situation, and I’m kinda into it.”

Thursday afternoon, after he was interviewed by the Daily Dot, Kocher says he got another piece of Milonakis art tattooed on his arm. This time is was of Tommy Tang the weed smoking robot.

Kocher’s tattoo and Milonakis’ art haven’t received the warmest reception from people on Twitter and elsewhere, but that doesn’t bother them. Milonakis is serious about his work.

“Even though my drawings are pretty dang childish, I am keeping things legit. People are asking me to recreate certain ones that were already bought and I refuse. There’s no way I’m going to sell originals and then recreate them for people,” Milonakis said. “Just because it looks like a kindergartner on 20 cans of Redbull created them, I gotta keep it real.”

Since his show ended in 2007, Milonakis has been busy recording music, making movies, performing live, and hanging with his pet turtle named Herbie. He plans on producing another series of art “sometime before the destruction of the world,” he said.

In the meanwhile, Milonakis has been in New York shooting a pilot for a new TV show.

“I’m not allowed to say what it is yet, it’s very different from The Andy Milonakis Show but it does have some similarities. The main one being that Andy Milonakis is in it,” he said. “Sorry, I never refer to myself in the third person but for that joke it was necessary.”