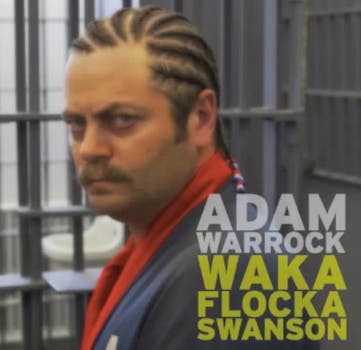 If you woke up today wondering why there aren’t more hip-hop songs about small-town Indiana bureaucrats, rapper Adam WarRock has you covered.

The meme-ification of NBC’s Parks and Recreation continues with the release of three hip-hop tracks dedicated to Pawnee’s favorite sons and daughters, including Little Sebastian, Detlef Schrempf, and, of course, Ron F——g Swanson.

“It was honestly a complete goof,” said WarRock, né Eugene Ahn, a man HowStuffWorks named one of the 10 Standout Nerds of 2011.

“I was sitting at a cafe with my friend, and I said aloud, ‘Say I was to do a song about Ron Swanson. What would that song be like?’ We just kept talking, and I just said aloud, ‘Waka Flocka Swanson,’ because it just made me laugh. So I found a good Waka Flocka beat, went home, and recorded that song.”

In addition to “Waka Flocka Swanson,” WarRock’s “Parks + Rec” EP includes “Entertainment 720,” an ode to the short-lived media company/money-printing operation run by Tom Haverford and Jean-Ralphio, and “Knope 2012,” an anthem that, with a few proper nouns replaced, could be easily rewritten as a campaign song for Barack Obama.

While much of WarRock’s past work has focused on the fictional worlds of comic books and television shows, he recently explored more serious territory when he released the song “F— SOPA” in protest of the Stop Online Piracy Act, a controversial pro-copyright bill that’s been shelved amid widespread protests by the Internet community.

Although some pro-SOPA alarmists would have you believe that online piracy will usher in a world without artistry or innovation, WarRock sees things differently.

“I put all my professional releases on Demonoid and torrent [file-sharing] sites. Download my stuff, I don’t care. If you like my music, come to a show. Buy a T-shirt. Or just care. Comment, engage, share.”

Or, as Ron Swanson puts it, “Why the government is involved in an art show is beyond me.”