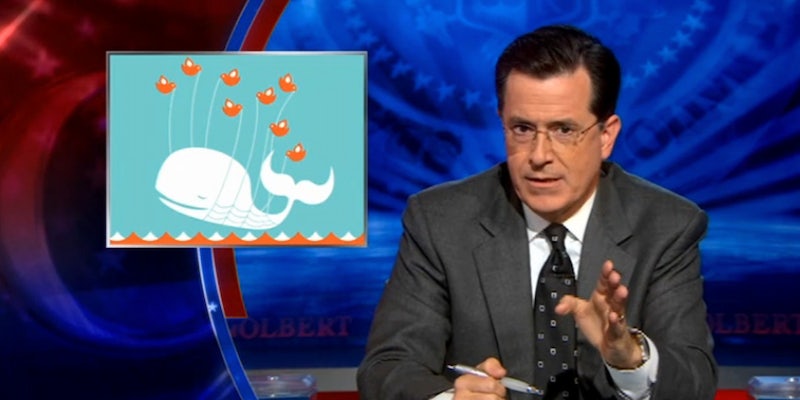 #CancelColbert is about more than a joke

So it our humor that needs to evolve or is it the mainstream American culture’s understanding of identity, oppression, and justice?

In comedy, there’s often a fine line when it comes to humor. Timing, language, the identities of the comedian—these can make a perfect joke or signify a terrible threat. So how did last night’s Twitter discussion about The Colbert Show’s misguided satire become open season on Asian women so quickly? And how does the violence of online behavior translate into the institutionalized oppression of offline politics?

It began when The Colbert Report tweeted out a provocative one-liner from one of the show’s segments meant to satirize Dan Snyder’s ignorant and insensitive move to create the “Washington Redskins Original Americans Foundation,” itself a slap in the face to many individuals, organizations, and Native American/First Nations tribal communities who have long been demanding a change to the Washington football franchise’s name and mascot.

About an hour later, signal booster extraordinaire Suey Park had created and started tweeting #CancelColbert with a rundown of why the show’s attempt at comedy was not funny. Thousands joined in (including myself) and for the next two hours, #CancelColbert was a national trending topic, eclipsing even the live-tweeters of Scandal. Tweets ranged from a history lesson of anti-Asian violence to those who spoke about why the segment and tweet triggered negative childhood memories.

As expected, white people from all over the Twitterverse also responded, using #CancelColbert to tell Asian Twitter that it was “okay” because he was making fun of Snyder’s unacceptable behavior; this was, after all, coming just weeks after Gawker spinoff Valleywag compared (and then brushed off backlash about) a new Internet dating startup to the mass sex trafficking of Korean “comfort women” during World War II, so I was not surprised.

From there, the responses got uglier. Twitter users started the hashtag #CancelSueyPark, which taken by itself might seem like a sarcastic play on words, but when accompanied with the rape and death threats she was receiving in real time was anything but clever.

I couldn’t bring myself to read through the full barrage of hatred in Suey’s mentions. The perceived anonymity of Twitter gives people the license to express sentiments they wouldn’t dare to in a face-to-face interaction.

However personal the attacks though, this is not just about the cyberbullying that Suey or other Asian women (as a fellow Tweeter points out) experienced last night or abuse they continued to receive today. It’s how enforced “harmlessness” of a culture of bullying and marginalization creates an environment in which people feel free to enact and institutionalize this abuse without fear of being held accountable.

Asian Twitter has been labeled as “overly sensitive” and is being told to laugh along with everyone else when in fact, but what gets lost when people are told to simply find the humor achieved at their expense is the fact that one “joke” labeled “satire” is part of a larger cultural acceptance of casual racism and xenophobia. When we decide as a culture that something as “innocuous” as othering Asian people and communities through humor is okay, then we perpetuate a social and political environment where lawmakers can pass policies that use anti-Asian rhetoric as a primary motivation.

What does this look like in practice? This week in South Dakota, Governor Daugaard signed HB 1162, a law specifically targeting Asian women and that seeks to combat sex-selective abortion, which even anti-choice organizers admit is not an identifiable problem. As Colorlines and the Associated Press note, two white male legislators were able to infuse their beliefs and attitudes about Asian women into the bill’s framing and language:

Rep. Don Haggar, R-Sioux Falls, suggested during a House debate that the bill was necessary because of an influx of immigrants to the state. And Rep. Stace Nelson, R-Fulton, said that he spent 18 years in Asia in the military and believes parts of the world don’t value women as much as he values his daughters.

Instead of promoting reproductive justice, however, HB 1162 strips bodily autonomy and self-determination by scapegoating Asian women in the name of “equality.” Even more disheartening, research from the National Asian Pacific American Women’s Forum (NAPAWF) found that more than 60 bills like HB 1162 have been introduced at the state and federal level since 2009 and given this most recent legislative victory, it is unlikely the pace will slow.

It’s not just about a joke that Asian people were supposed to find funny. It’s also about a cyberbullying culture that Asian women are supposed to accept as the price of public engagement and a growing body of legislation that is supposed to help support gender equity, concerns that continue to remain ignored by a media that normalizes that marginalization. It’s easier to silence Asian women than to listen.

So is it our humor that needs to evolve or is it the mainstream American culture’s understanding of identity, oppression, and justice? It’s not just that Asians and Asian Americans are demanding legitimacy on Twitter. We are fighting for our humanity in the offline world of our everyday lives.

Joy Messinger is an educator and activist for sexuality, reproductive justice, adoption, queerness, and Asian American feminism. Her writing can also be found at Gazillion Voices, an online magazine by and for adoptees and their allies.

Photo via NoahSussman/Flickr (CC BY 2.0)