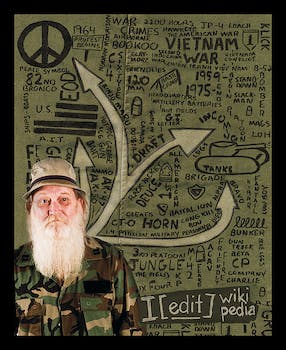 Wikipedia says its staffers are not vandalizing Wikipedia

A Wikimedia spokersperson says a series of malicious edits have nothing to do with the foundation, even though they originate from one of its IP addresses.

To your average Wikipedia sleuth, it sure looks like staffers at the encyclopedia’s parent organization, Wikimedia, have been caught vandalizing articles on their own website. Anonymous editors working with an address that points to a Wikimedia server have been caught inserting sophomoric and potentially libelous edits to articles ranging from Bakersfield High School to Dom Deluise.

But a Wikimedia spokesperson claims it’s all a misunderstanding—little more than a bug related to how Wikipedia handles anonymous edits.

The accusations surfaced Monday on Wikipediocracy, a site known for digging up dirt on Wikipedia’s top brass. Wikipedia allows anyone to edit the encyclopedia anonymously, but when you do so it will record your IP address—a unique number that points to the server a computer is using to access the Internet. In one case, someone form the IP 208.80.152.185–which tracks back to the Wikimedia Foundation’s offices in San Francisco, according to a Who.is seach—changed the name of Calfiornia’s East Bakersfield High School sports team from the “Blades” to the “Masturbaters.”

Another editor with a Wikimedia foundation IP seemed to bear a serious vendetta against former ESPN host Rob Parker, adding this piece to his biography on Jan. 6, 2012:

“In his free time, he enjoys blowing Oriental Sausage and shoving uncooked eggs up his anus.”

Actor Dom DeLuise, meanwhile, became the victim of an editor with a creative understanding of the physics of asses:

He used to be a chef on T.V., but now he just sits at home with his ass up his ass!

It all looks very damning. Vandalism is forbidden on Wikipedia. It’s a serious problem that undermines the encyclopedia’s authority and sucks away valuable time from the site’s volunteer editors. But Jay Walsh, the Wikimedia Foundation’s communications head, told the Daily Dot that, despite how things appear, those edits actually came from outside the Wikimedia offices.

The alleged addresses are not WMF office IP addresses (in other words they didn’t take place from within the Foundation). They’re WMF server (the servers that host all of the Wikimedia projects) IP addresses that were assigned to some edits due to a misconfiguration. Under some circumstances, the user’s IP would not be recorded and a server IP address through which they’re accessing the Wikimedia network would be recorded.

In other words, according to Walsh, wires crossed within Wikipedia, so that when someone tried to make an anonymous change, the encyclopedia recorded the IP address of the secure server they were using to make the edit.

“That instance of the issue has since been fixed,” Walsh added. “But there may still be rare circumstances under which this does occur.”

UPDATE: I was curious: What would an anonymous edit look like if it really did come from the Wikimedia offices? Surely there should be some difference, otherwise it would be too easy to dismiss Wikimedia’s explanation as a convenient excuse. I reached out to Walsh for a follow-up. He decided to make an anonymous edit to his own Talk page (“in the interest of transparency”), which showed his IP as 216.38.130.163. That’s different from each of the suspect edits and also tracks back to the Wikimedia foundation, according to Who.is.