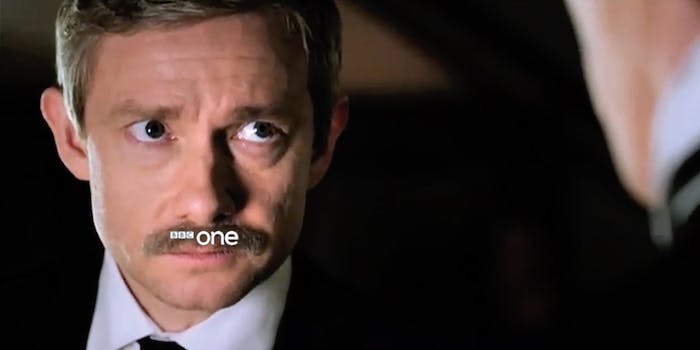 But it brought with it a questionable moustache.

The BBC is ramping up publicity for the new season of Sherlock, beginning with an update on John Watson’s blog. It’s about time; some fans have been checking the page since the last season ended in January 2012.

The blog is inspired by Watson’s role as the detective’s biographer in the original Sherlock Holmes stories. Rather than publishing tales of their adventures in the Strand newspaper, our 21st century Watson is forced to write a diary as part of his therapy after serving in Afghanistan. As the first and second seasons progressed, other characters began popping up on the blog to comment on entries, including some of Sherlock’s own fans and followers within the show.

“Things happen. Then they’re in the past. And you move on to new things. New people. New friends. New beginnings.

But it’s also important not to forget the past. And I’ve found a few photos and a few blog posts I never finished so over the next few weeks I’ll be doing that really. Remembering the past.

And I won’t feel sad about it. Not any more. Because they were good times. We did good and we had fun. And that’s what I’m going to remember. My best friend, and he’d kill me for saying that’s what he was, is dead. Sherlock Holmes is dead.

But, by God, he’ll never be forgotten.”

So, it looks like we’ll be getting some write-ups of old Sherlock cases over the next few weeks, maybe even ones that didn’t appear on the show. But the most telling hint of things to come is hidden in the comments: a couple of messages from someone named Mary, the same name as Watson’s wife in the original Holmes books.

We probably don’t need to include a spoiler alert for you to know that Sherlock is not, in fact, dead. Particularly since the new season 3 trailer is riddled with hashtags for #SherlockLives and the like, a smart combination of viral marketing and a play on an in-show gimmick where tweets and texts appear onscreen like speech bubbles. As soon as Sherlock returns for real, his fans will tweet about it—even if they’re fictional characters in the show itself.

Still, Sherlock’s mysterious survival is not what most fans on Tumblr are concentrating on. Instead, it’s Watson’s new moustache. Or mournstache, as some people are calling it. The mournstache may already have inspired fanart, but we’re pretty sure that most Watson fans are already counting the days until he shaves it off.

Maybe the blog should start including facial hair updates.