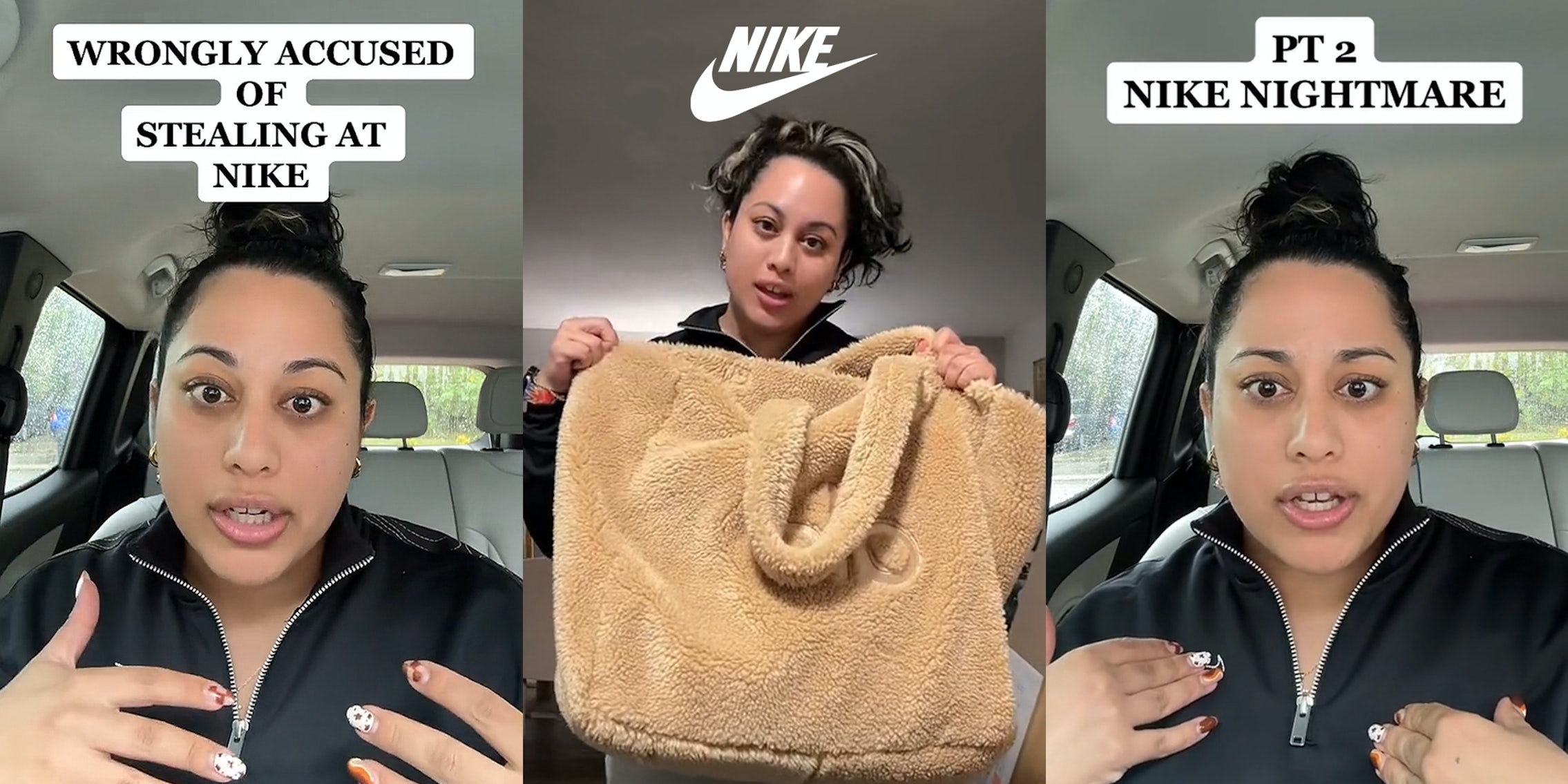 ‘I am so absolutely mortified’: Customer says she was wrongly accused of stealing by Nike store employee

'You should sue them for false accusation.'

A TikToker named Amanda (@daleamanduh) went viral for calling out a Nike location that accused her of shoplifting during a recent visit.

In her initial video, Amanda says she entered the Orlando store at Waterford Lakes with her mother and 10-year-old son with the intention to return some items. After browsing the store while waiting for the customer line to thin out so she could process her return, she says she was approached by an employee, who confronted her about stealing.

The manager allegedly told Amanda that she saw her put something in her tote bag and to get out of her store. However, Amanda says it was her son’s denim jacket she had removed from him earlier, not exactly an item that the athletic brand is known for manufacturing.

“I was like, ‘what?'” Amanda says she responded to the employee’s accusation. “And she goes, ‘we have cameras and we’re watching you and we saw that you put these things in your bag, so you need to get out of my store.'”

The TikToker says she was confused and immediately opened her bag to show the employee her son’s denim jacket.

“Underneath [the jacket] was my return and she goes, ‘well what about those?’ and I go, ‘that’s my return and I have the receipt on my phone,'” Amanda claims she said.

Amanda says she was “shaking” from anger and after realizing what was happening, she asked the employee whether she was being accused of stealing in front of everyone.

“There were three employees with her, so it was her, and two, three other guys in the middle of the floor just, and she’s accusing me of stealing,” Amanda shares. “And I was just literally in shock, and I go, ‘is this how you are approaching me? With all of these people?!'”

Amanda divulged more info in a follow-up video, stating that she began to raise her voice once it dawned on her that she was being called a thief. She adds that the woman apologized to her, albeit emotionlessly, who then asked if she was going to return her items.

Amanda told the manager that her behavior and actions weren’t acceptable as she approached the counter to return her items. She says that she was still shaking following her interaction, so she asked another employee for the accuser’s name.

Eventually, Amanda speaks with a supervisor who gives her the woman’s name at Amanda’s request.

“As he’s telling me her name I am shaking so hard that I can barely even like type the name because I’m just like, did you really just do this in front of my son and my mother and an entire store?” Amanda says.

Amanda, who claims to be an avid supporter of the brand, says she plans on going “all the way up” with it and that she won’t be frequenting that location to buy clothes ever again.

Some TikTokers wanted to see the bag that she was talking about in the original video that she put her son’s denim jacket in. She showed it off, highlighting that due to its size, fabric, and appearance, it wouldn’t exactly be the most “subtle” choice for a shoplifter.

TikTokers who heard her story were outraged. Some encouraged her to sue the store for “profiling” her while others tagged the apparel brand to try and ameliorate the situation.

“DENIM JACKET? NIKE DONT EVEN SELL DENIM JACKETS???? you’re better then me cause I would of screamed at her face smh I’m sorry this happened to you!!” a top comment read.

“Retail manager for 8+ years. Get ur coins girl. 1 big no no is NEVER I mean NEVER accuse someone of stealing. Take it all the way,” another shared.

“Where I work we are not allowed to question a customer. you can sue the company for this,” one user wrote.

In a couple of update videos, Amanda shares that after being hung up on by Nike’s customer service about “25 times,” she was able to get ahold of the district manager via a viewer’s help.

@daleamanduh Replying to @gracii31 this has been the absolute worst. But I’m not stopping yet @nike #nike #customercomplaints ♬ original sound – Amanduhayeeee

“He heard me out which was the furthest I’ve gotten,” she says in the clip. She continues that the district manager promised to “get her to the right people.” Nike also reportedly responded to her Instagram direct message, though she believes she will “not have a resolution for a while” as the store deals with Black Friday.

The Daily Dot has reached out to Amanda via Instagram DM, and Nike via email for further comment.