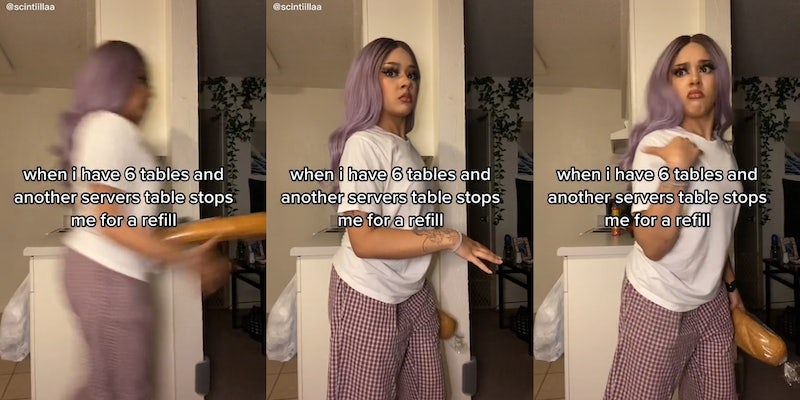 ‘I do this if my server takes more than 20 mins’: Server shares what you should never do in restaurant

'Oh nah honey I ain't taking care of u for free.'

We’ve all been there: You’re at a restaurant and you have a question about the menu, or you’d like to order another drink, but unfortunately your server who eagerly greeted you earlier is nowhere to be found.

So you stop another server to fulfill your request. According to TikToker @scintiillaa, that’s exactly what not to do—especially if another server is busy juggling multiple tables all at once.

In a recent video that was viewed over 500,000 times, @scintiillaa acts out a scenario in which a server who’s taking care of six tables is caught off guard by a random customer asking for a refill.

“She not talking to me? Like —” the audio notes in the background of @scintiillaa’s video.

In her caption, @scintiillaa noted how since she wasn’t being paid to take care of that particular table, she would prefer to go find their assigned server to take care of them. (Typically, servers have a certain number of tables they are assigned to, and they oftentimes take care of multiple groups at once.)

Some commenters admitted to asking people who are not their servers to fulfill requests, while others who seemed to have experience in the service industry heavily related to the video.

“When I run someone’s food and then they ask me for napkins, side plates, refills, and more sauce… oh nah honey I ain’t taking care of u for free,” a commenter said.

Some commenters advised customers to ask staff for their server instead of asking someone not assigned to their table to fulfill their request.

“‘Can I get a refill?’ Yeah, of course you can, just not from me,” one commenter said.

Update 11:43am CT, Sept. 13: Twenty-one-year-old Abrielle Tatum (@scintiillaa) told the Daily Dot she wanted to create “something funny and relatable for other servers.”

“That’s what a lot of my account is about. I also try to bring awareness to what it’s like working as a server because a lot of people have no idea that we don’t get paid by the hour and believe we’re just ungrateful,” she said.

She said she enjoys being a server because some customers can be very pleasant. “They make up for the not so pleasant customers,” she said.

She said her TikTok video is based on her experience as a server and that critics “took it as me just not wanting to help people who aren’t paying me.”

“It’s really because if it’s super busy and i’m taking care of other peoples tables, mine will be abandoned and I’ll be less likely to be paid by them but this is ONLY when it’s busy,” she said.