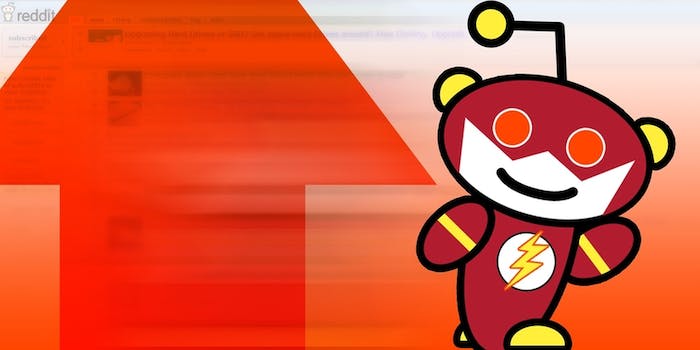 Revealed: The secret to winning the game of Reddit

Reddit's never seen someone like UpMan, king of the comments.

If you strip Reddit down to its core—if you forget about all its promises to democratize the content, its grand dreams to become the Internet’s universal discussion platform—it’s all really just a game. And like any game, there are people playing it at a level you never thought possible.

Reddit’s lifeblood is karma, a voting system that rewards people for providing the community with good (or, at least, popular) content. The more upvotes a post receives, the higher probability it has of reaching Reddit’s front page. The more upvotes a comment receives, the higher chance it has of rising to the top of a thread. All those upvotes and downvotes are tracked, and the cumulative is what’s known as a karma score.

There are two categories: link and comment karma. The former is dominated by maxwellhill who, in seven years, has accumulated 2.1 million karma, according to independent analytics site Karmawhores. Redditor apostolate sits atop the comment karma throne with 1.4 million. He did that in one year.

Neither accomplishment compares to what a mysterious redditor named UpMan did on Aug. 27.

Over 11 days, UpMan collected 100,000 comment karma, mking him the fastest person to reach that mark in Reddit’s history. At that pace, he’ll hit 3.1 million in a year.

“It was really spur of the moment,” UpMan told the Daily Dot.

The previous title holder was a redditor named prostitute_strangler. He amassed 100,000 comment karma in 22 days. UpMan did it in half that time, all with a much less, um, noticeable username.

Here’s how UpMan beat prostitute_strangler in the game of Reddit karma.

How much planning did you do ahead of time before you tried to set this record?

I was browsing Reddit, noticing users who had large amounts of karma in short periods of time, and it seemed like a fun thing to try. My other account had under 25,000 karma and was already months old, so I decided to register a new account. I was amazed to see that the name ‘UpMan’ wasn’t taken, so I chose it to try to rack up as much karma as possible in a short time period. I had no idea so many people were going to recognize my username from thread to thread.

What was the game plan?

My main strategy was to browse the threads that were relatively new and were gaining upvotes quickly. Inserting a reply on a successful parent comment [that is, replying to a comment that was already at the top of a thread] would gain a large amount of points once it reached the front page, more often than not. Basically commenting on a thread before it hit the front page resulted in the most successful comments. I didn’t realize that r/askreddit threads gained upvotes slower but had much higher upvoted comments ’til a week or so into the account. If I had to do it over, I would definitely aim more comments at r/askreddit threads, which probably would have got me to 100,000 even faster.

How many hours did you dedicate to Reddit each day?

Too many. There wasn’t a definite amount of time I put in each day, but I always had Reddit open, browsing through potential front page posts. If I wasn’t on my computer, I had Reddit up on my phone. I had as much free time as I wanted, since my university doesn’t start ’til the end of September.

Did you ever fall behind the pace you wanted to set? How did you make up for it?

The first few days I had less than 8,000 a day, as I was still trying to figure everything out, but days to follow were much more successful. About day eight, commenting so much just didn’t seem like fun, and I spent most of the day with friends. I only made a few comments, but luckily they were some of my most successful, so it didn’t put me too far off track. However, instead of reaching 100,000 in 10 days it was going to be 11, as I coasted through the next few days.

Did you receive any help from other redditors over the course of the 11 days?

I received tons of private messages asking how I managed to get so many highly upvoted comments, and other messages about the CenturyClub, how I would be the fastest person the reach 100,000 if I kept up the pace.

How did it feel to beat the record?

It felt great knowing I could get so much karma in such a short amount of time, that people appreciated the comments I was leaving, but it was disheartening reading many comments about how I must be a team of people posting witty comments or a bot that somehow unfairly got karma. I just decided to take it as a compliment.

After collecting so much karma in so little time, did you learn anything new about the site?

I found that there were more threads blowing up around 6-9PM my time (PST) and, in turn, more people to upvote comments. I also learned that when Reddit sees a successful and easily applicable joke, it will get beaten to death. Probably one third of the replies to my comments were “What’s UpMan?” as it had been successful in gaining a lot of upvotes in recent threads. It caught on quickly and there was an obligatory “What’s UpMan” reply for every one of my comments.

So much has been said, and will be said, about Reddit’s karma system and what it really means in terms of influence on the site. What is your opinion on it?

I view it as more of a game. I think some users like to imagine that huge amounts of karma make them more influential and respected, but in reality it seems like the many other millions of redditors don’t have very positive views of these “karmawhores,” unless they contribute to threads. It’s very interesting nonetheless.