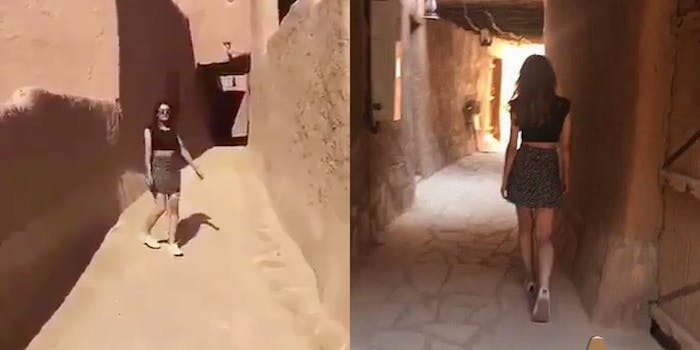 Officials are calling for her arrest.

An unidentified woman is facing criticism for wearing a skirt and a crop top through one of Saudi Arabia‘s most conservative provinces, with religious, conservative Saudis calling for her arrest.

Videos of the woman in several locations throughout the Najd province were uploaded to Snapchat by the user Khulood. In the clips, the woman is wearing short clothing and doesn’t have her hair or face covered. The clip causing major outrage shows her walking through an ancient fort in Ushayqir, a village in the province.

Her outfit contradicts conservative laws requiring women to cover themselves in public. According to the Washington Post, foreigners aren’t upheld to follow such rules, while Saudi women have methods of avoiding them. Even defenders of the woman have supported her “bravery,” and have pointed to First Lady Melania Trump and presidential adviser Ivanka Trump as women who have also been exempt from the clothing requirement.

Despite this, upset conservatives have called for the woman’s jailing with a Twitter hashtag saying she should stand trial and arguing that as a citizen of the country, she should obey the law.

According to local reports, officials have also asked the region’s governor and police to take action against the video’s creator. Saudi Arabia’s religious police have also tweeted that they’re looking into the video.

An attempt to add the woman’s alleged account on Snapchat was unsuccessful.

Update July 20, 8:14am CT: The women in the Snapchat was detained by Saudi police earlier this week and questioned for her “immodest clothes,” reports the AP. However, she was released Wednesday without charge. The AP notes that the international attention brought to the case, as well as the progressive views of the new heir to the Saudi throne, may have aided in her release.