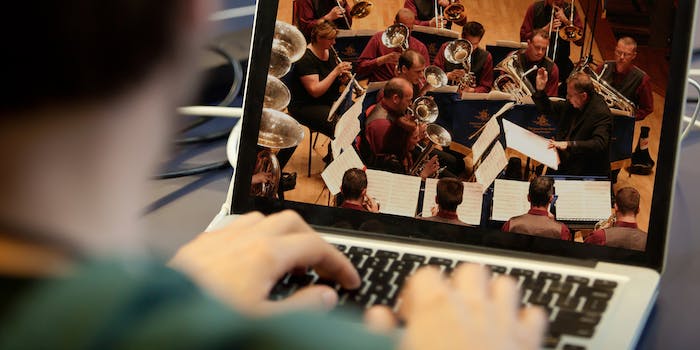 I was a player in the global Internet orchestra

For one brief moment, it seemed like we were making music. And then all hell broke loose.

A single, sad note bleats through my headphones. It’s answered by a slightly off-key rendition of the chorus from the Barber of Seville. There’s a noticeable sense of anxiety in the air, raw-edged and framed by the building clamor. People are getting fidgety and for good reason.

Any minute, this group of strangers, most of whom have never met, will begin playing in front of a live audience we cannot see.

We’re the Global Net Orchestra. And I have no idea what I’m doing.

The concert I signed up for would showcase 100 people from around the world collaborating live in an electronic, computer-driven concert—like a massive group game of Guitar Hero, except instead of faux-guitars each person plays their own digital orchestral instrument. The concert, which doubled as an event for an art symposium at Connecticut College, would broadcast across the Internet at 10:10am ET on March 1.

It began about a month ago. One of my college-going friends needed help with a homework assignment. “Be my stand-in partner?” he asked, linking me to his assignment. The basic idea seemed simple enough: I’d play in an online orchestra, he’d supervise. I’ll gain experience, he’ll earn credit in his computer music class.

On Feb. 26, a handful of people and I showed up for the last rehearsal, which basically meant sitting wide-eyed in front of the open software as we listened to Dannenberg’s instructions. We started with what many of the participants ended up jokingly labelling as “Laptop Hero.”

As in Guitar Hero, the far more mainstream music simulation game, a series of key prompts glide vertically from the top of the screen down. In order to make music, you only have to press the corresponding buttons when the prompt reaches the bottom. That part was easy and, even though I was still just practicing, strangely beautiful. The pieces were slow, haunting processions of melodies, like whale song set to classical electronica.

Improvisational play, which was supposed to come right after the prepared pieces, was harder.

Graphical bars replaced the simple-to-read key prompts. We ran through a perfunctory explanation of the “languages” used in the Global Net Orchestra: staccato, legato formings, trills, and more.

Then, Dannenberg casually reminded us over voice chat to play the “language” in accordance to the required pitch and intensity. But he didn’t tell us what to play exactly. There were no notes to follow, no designated keys to hit. We had to improvise. We had to play like lawless kids in a schoolyard. From what I could tell, most of us were just mashing on our keyboard as alien hieroglyphs popped up at seeming random. Line. Squibbly bits. Angular, squibbly bits. Red light. Red light. Shifting intensity. Oh god, what is this I don’t even.

If panic had a language, it would probably be very much like what transpired that day.

This wasn’t an encouraging start. And right before the actual performance on March 1, I spent hours trying to think of a way to get out of it: rehearsing excuses and drafting awkward explanations about computer mishaps or wonky Internet connections.

But in the end, I chose to stick it out.

I logged onto the system and typed a greeting into the chat interface. Someone asked me to perform a scale. I did. They left and I ended up alone in the now barren, silent program. It took me another 15 minutes to realize I was an hour early.

Eventually, 63 other people showed up. Dannenberg’s slightly strained voice rang through the speakers sometime around noon PST. He briefed us on what to expect, on what he’ll be doing and how he will be attempting to communicate with both the audience and his questionably prepared computer orchestra.

“We can hear you.” Dannenberg’s voice cut through the building noise.

A desultory, defiant note emerged from somewhere in the legion of digitized performers: Plink.

An embarrassed quiet immediately followed. Again, I found myself on the brink of ripping the cords from my router and pleading an act of God when Dannenberg’s voice echoed again:

“People on earth need to learn to take care of one another. Performing with the Global Net Orchestra helps us to realize we’re brothers and sisters,“ he told our unseen audience, his voice a little tinny from the microphone but still weighted with gravitas.

I think I could almost pinpoint the exact moment my cynicism gave way. Ever heard of the Infinite Monkey Theorem? It’s this idea that, if you put together a hundred monkeys slapping away at a hundred keyboards for infinity, they would almost surely recreate works of Shakespeare at some point. There are even mathematical proofs for this. So there’s no reason that 64 people can’t make a simulacrum of music, right?

Emboldened by that epiphany, I eagerly told a friend to check in on the broadcast even as the prompts began scrolling luxuriously down my screen. The first piece is Prayer for Peace, a Dannenberg original.

During a lull, I texted my friend:  “How’s the performance?”

Peace was a theme on the night. We moved on Bach’s Grant Us Peace. I continued running through the keys, stubbornly determined to show that the experiment can work. And it did, to some extent. The long, drawn-out notes might have sounded more like a dirge, but it was music. A little frayed, a little discordant, and vaguely reminiscent of a funeral march. But still distinctively, beautifully and bewilderingly music.

We were doing it, I thought triumphantly.

Then, we shifted to the improvisational section and all hell broke loose.

Line. Squiggly line. Angular lines. What the hell are staccato line formings again? Flashing, red button-prompts and a shifting intensity bar. At first, I tried madly to follow the errant rhythm but I soon stop. Better to be silent than to be a fat-fingered imbecile on the keys, right? Right? Oh, god. Relief returned when more familiar text replaces the angry tattoo of sigils.

A line blinked into life into the chat room: “Was that the prompt for interpolated Corelli?”

I had no idea what an interpolated Corelli is. I think it’s the short score we received in our email the day before.

Ugly epiphanies uncurled. In the email, we were told to identify our roles so we could perform the appropriate score. There would be no prompts. We just had to play it all over the course of 100 seconds. But how do you accomplish that when you missed your cue? Loudly, it appears. And with varying degrees of enthusiasm. The subsequent, ear-splitting din was like Edgar Allen Poe’s nightmares turned aural. I could feel an encroaching headache throb.  My only consolation was that there probably would not be an encore.

“Oh god,” my friend messaged me halfway through the uncertain symphony.“Chaos. Madness. This is where the character is falling down into the black hole.”

It is an appropriate enough description. When we finally arrive at the drum circle, I was too exhausted to take note of anything. My fingers clung to the repetitive cadence. Someone performed a solo, I think. I couldn’t tell. I kept tapping out the same rhythm. At some point, it ended. I didn’t think twice about Dannenberg’s exiting anecdote. I was done, melting into a pile of self-pity.

But this one bad and bizarre performance somehow didn’t spoil the experience for me. The Global Net Orchestra might not have quite panned out the way I imagined. But for one moment, we were performing together, as faceless to each other as we were to the audience. The Global Net Orchestra was about what we were doing together. It might not have been perfect or even pretty. But it felt like the beginning of something bigger.

Dannenberg’s players might be a bunch of monkeys banging on the keys today. But tomorrow? Maybe they’ll be Bach.